Disorders of Monosaccharide Synthesis and Interconversion

Disorders of monosaccharide synthesis and interconversion include: 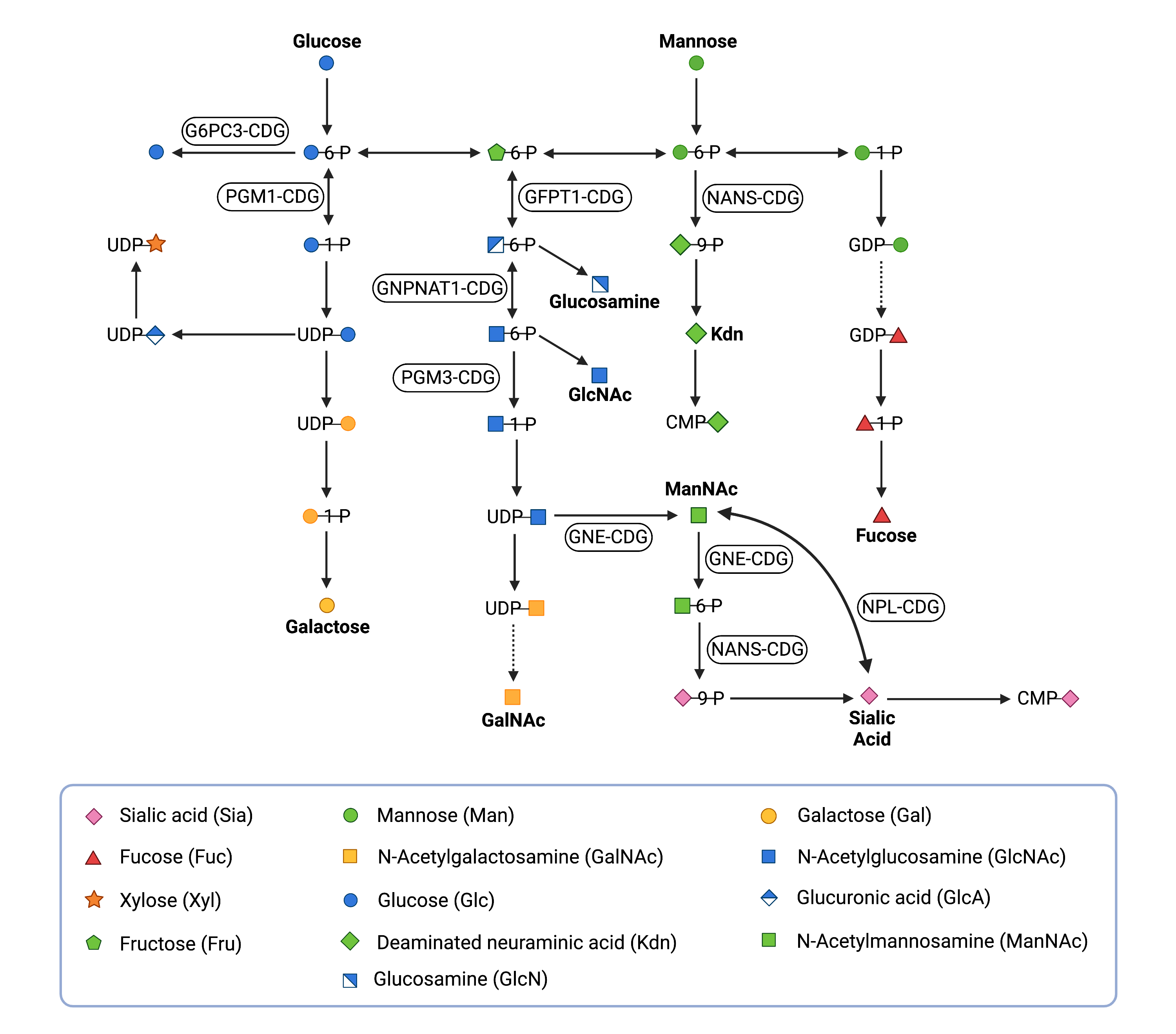 Disorders of dolichol metabolism include: 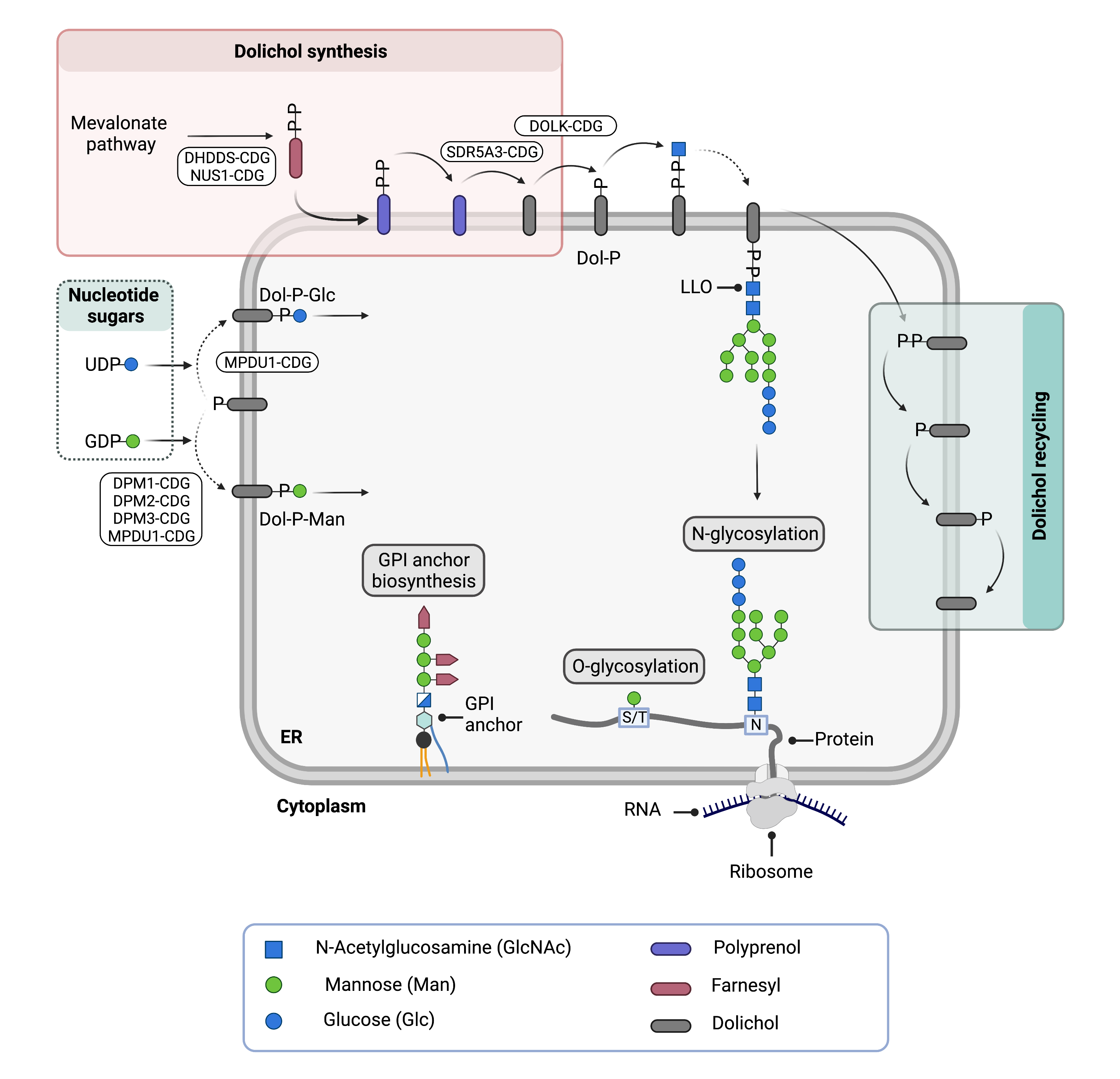 Figure 2. Overview of dolichol metabolism in different glycosylation pathways and associated CDG types.
Dolichol is generated through a series of enzymatic reactions and subsequently phosphorylated (Dol-P). Mannose or glucose are attached to Dol-P to generate activated sugars (Dol-P-Man; Dol-P-Glc) that function as sugar donors in several glycosylation pathways, including N- and O-glycosylation and GPI anchor biosynthesis. The lipid-linked-oligosaccharide (LLO) is built on Dol-P and the oligosaccharide is transferred to a protein in N-glycosylation.

Disorders of nucleotide sugar synthesis and transport include: 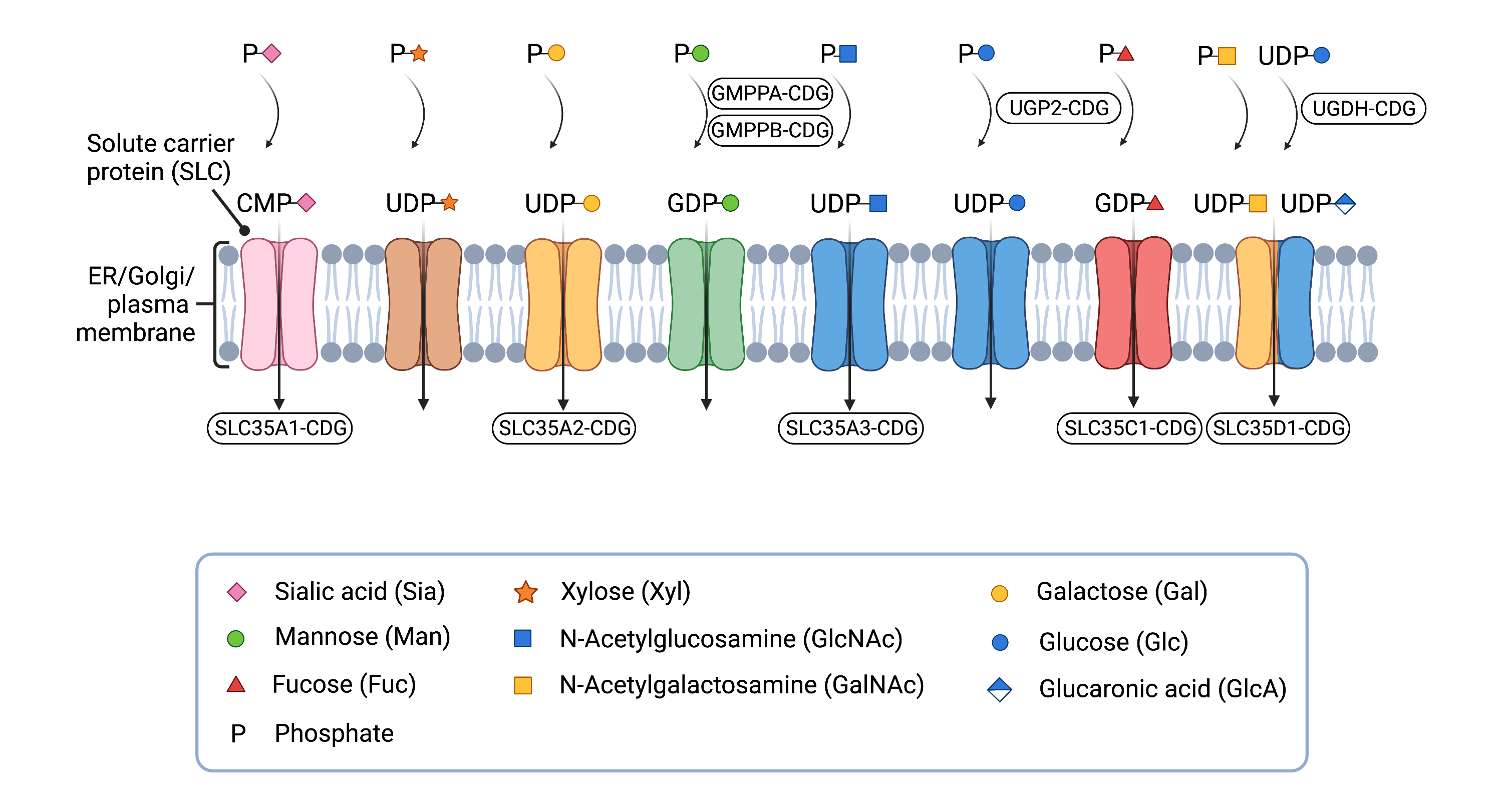 Figure 3. Overview of solute carrier (SLC) proteins and CDG caused by defects in nucleotide sugar synthesis or transport.
SLC proteins can transport nucleotide sugars into the different compartments of the cell, such as the ER and Golgi, for use in different glycosylation pathways.

Vesicles can be surrounded by coat protein complex (COP) proteins. The vesicles are able to attach to the Golgi membrane through the use of different proteins, such as the conserved oligomeric Golgi (COG) complex, SNAREs and tethering proteins, and CDG have been linked to defects in many of these proteins22,23.

Disorders of vesicle trafficking include: 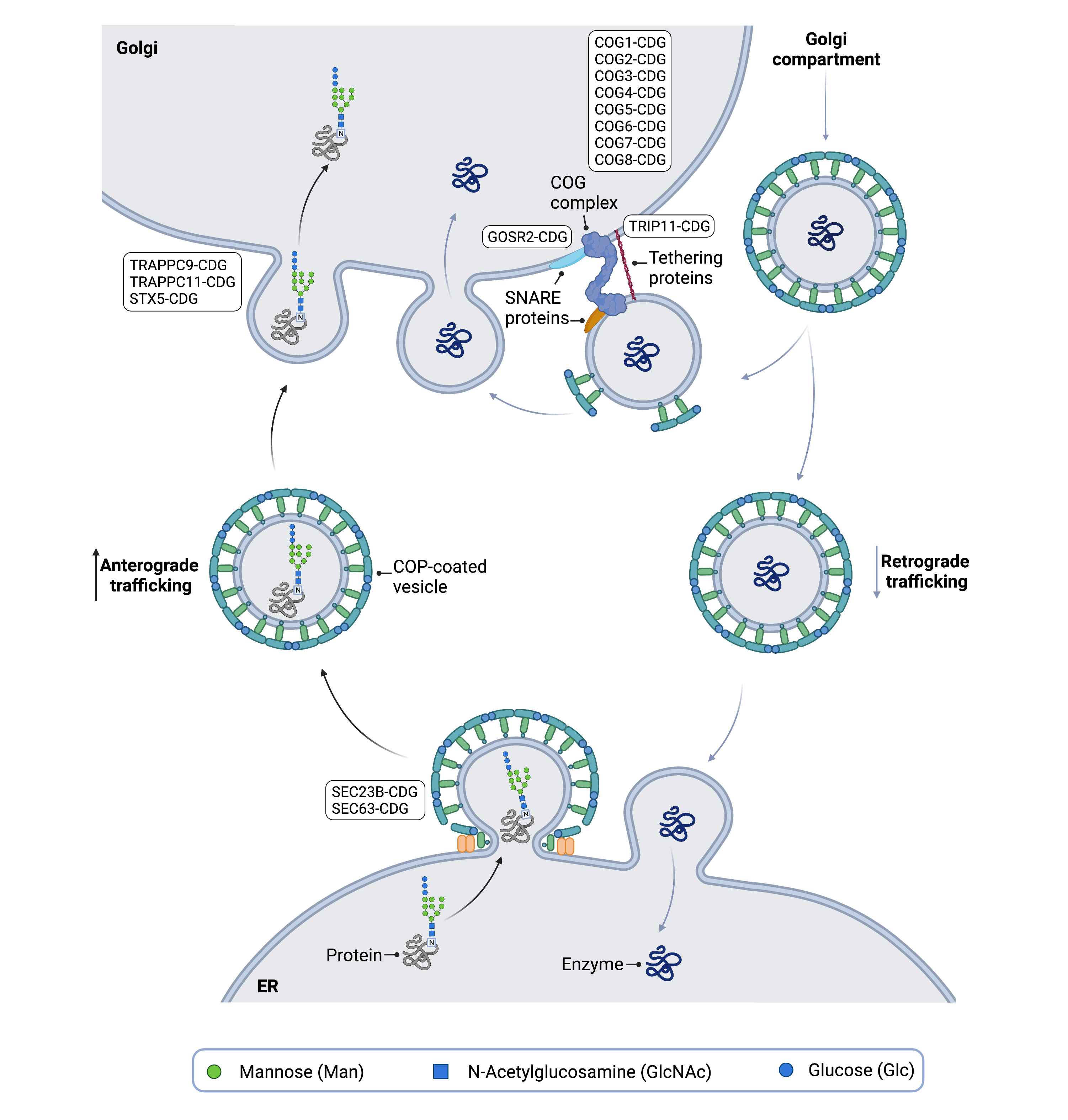 The main functions of the Golgi are sorting glycolipids and proteins into vesicles for delivery to target destinations and glycosylation. Maintenance (homeostasis) of these functions is dependent on maintaining specific pH levels and ion concentrations in the Golgi compartments. The acidic pH of the Golgi is established and maintained by ion transport systems which include the vacuolar H+-ATPase (an enzyme complex that pumps protons across membranes) and transporters that move Cl-, Na+ and K+ ions across the membrane. Other ions such as Ca2+, Mg2+ and Mn2+ are important for glycosylation and cargo sorting in the Golgi and are maintained at high concentrations in Golgi lumen by a number of ion channels and transporters.

Disorders of Golgi homeostasis include: 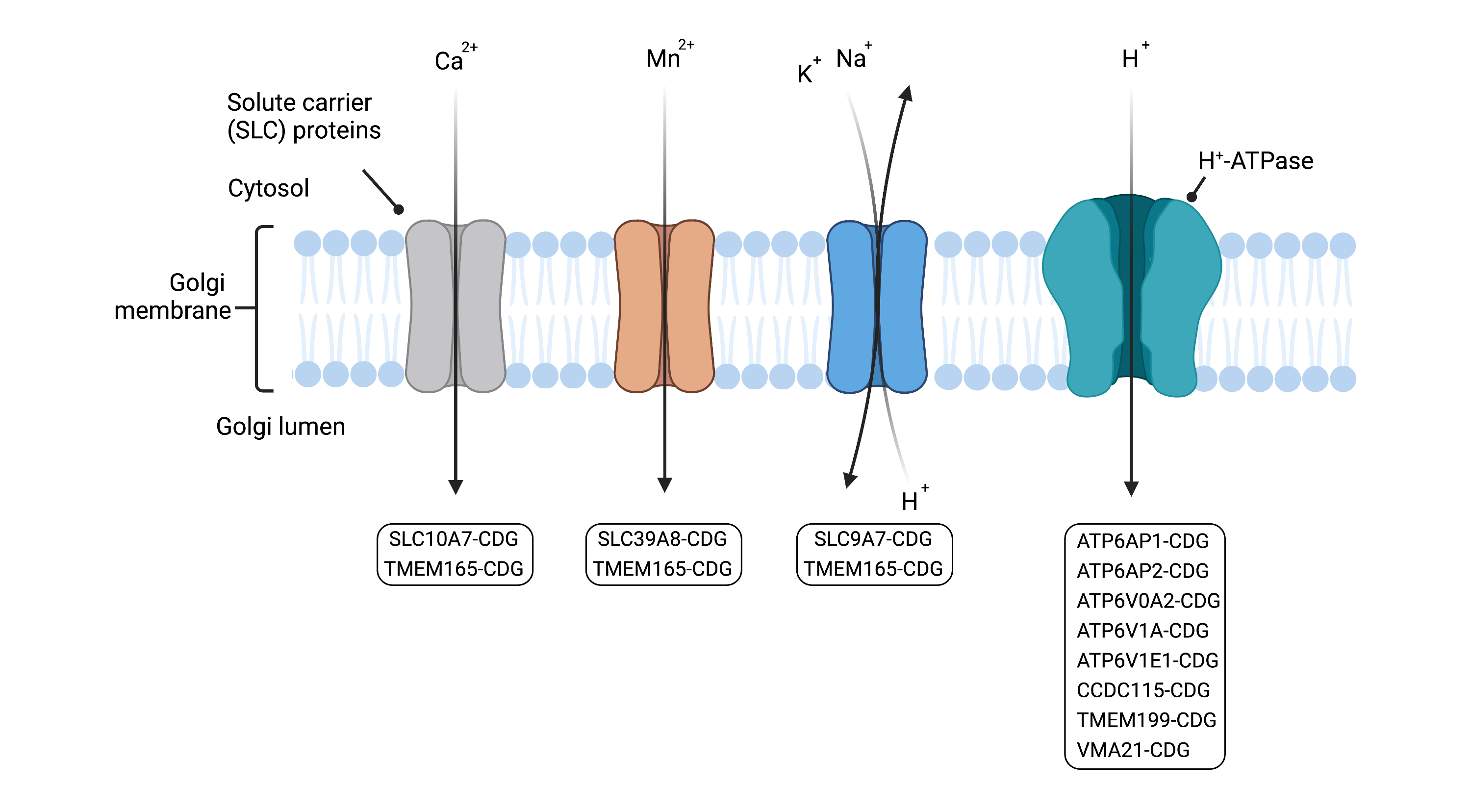 Figure 5. Overview of CDG caused by defects in Golgi homeostasis, arising from defects in ion transporters and vacuolar H+-ATPase.
Ion transporters move ions across the membrane of the Golgi and the vacuolar H+-ATPase maintains the pH of the Golgi. Defects in Golgi ion levels and pH can lead to reduced enzyme activity and glycosylation substances not being in the correct location.

Other Disorders of Multiple Glycosylation Pathways

Other disorders of multiple glycosylation pathways disrupt glycosylation through different processes than the ones described above. This includes CDG that arise due to defects in proteins (GET2-4) that facilitate targeting of membrane proteins to their correct location and a TGDS, an enzyme whose function is unknown but is linked to Catel-Manzke syndrome26.

Disorders that affect more than one glycosylation pathway may result in changes that can be detected using the standard diagnostic tests and strategies employed for other CDG types. These may include analysis of transferrin (an abundant serum N-glycoprotein)27,28, apolipoprotein C-III (a protein with an O-glycan)29, total plasma or serum N- or O-glycans30,31, and alpha-dystroglycan (an abundant O-mannosylated glycoprotein)32,33. Importantly, in CDG that only affect one glycosylation pathway, such as N-glycosylation, one biochemical marker may be abnormal while others remain unchanged34,35. However, in diseases of multiple glycosylation pathways, it is possible to see abnormalities in multiple different tests (e.g. abnormal transferrin and apolipoprotein C-III)36. If symptoms are highly suggestive of a problem caused by a defect in a particular gene, the activity of the corresponding enzyme can also be measured for some CDG37. Ultimately, these markers vary between disease and individual and genetic testing is required for definitive diagnosis38.

Apolipoprotein C-III (apo C-III) is a glycoprotein found in the blood that has a single O-linked glycan and is used to identify disorders of O-linked glycosylation42. Apolipoprotein C-III exists in three isoforms which differ in their number of sialic acid residues, including zero (apo C-III0), one (apo C-III1) or two (apo C-III2) sialic acid residues43. CDG that arise from defects in O-glycosylation and defects in Golgi homeostasis have increased levels of apo C-III0 and/or apo C-III144. These can be detected by different methods, such as isoelectric focusing, two-dimensional gel electrophoresis, capillary electrophoresis and mass spectrometry45,46.

Chemical analysis of the total N- and O-glycans present in patient plasma or serum may be used as part of diagnosis of CDG which affect multiple pathways49.

Genetic testing is often required to definitively diagnose CDG involving multiple pathways, and may include targeted sequencing of specific genes, use of CDG gene panels that test for known CDG, whole genome sequencing (WGS), and the sequencing of all expressed genes via whole exome sequencing (WES)50–53