PGM1-CDG, formerly known as CDG-It or Glycogen Storage Disease type XIV, is a rare inherited condition that affects many systems in the body. It is a relatively common congenital disorder of glycosylation (CDG) with more than 54 patients reported in the medical literature to-date.  PGM1-CDG is typically classified as a disorder of multiple glycosylation pathways and is more specifically a disorder of monosaccharide interconversion. PGM1-CDG is caused when an individual has mutations in both copies of the PGM1 gene, which provides instructions for making an enzyme that is responsible for maintaining the balance between two different forms of the sugar glucose. Mutations in the PGM1 gene cause some proteins to have incomplete or absent sugar chains and can impact the maintenance of normal sugar levels in the body. Symptoms of PGM1-CDG usually begin at infancy and affect multiple systems. The most common symptoms are growth delay, facial malformations that may include a cleft palate and/or uvula, low blood sugar, muscle weakness and difficulties with exercise, abnormal heart function, and liver disease. Neurological symptoms may also be present and include seizures and mild to moderate intellectual impairment. Several screening tests are available for PGM1-CDG, but a definitive diagnosis is achieved through genetic testing. PGM1-CDG is one of the few CDG that has a known treatment (galactose supplementation), and early diagnosis and treatment is critical for improving patient outcomes.

Besides its role in glycogen synthesis, UDP-glucose is an activated sugar (sugar donor) used in the construction of other glucose-containing sugar chains (glycans). It is also used in the synthesis of other activated sugars, such as dolichol-phosphate-glucose (Dol-P-glucose), which is the donor of glucose sugars inside the endoplasmic reticulum (ER), and UDP-galactose, used to donate the sugar galactose onto other molecules.  These sugar donors are crucial for N-glycosylation of proteins, and deficiency in PGM1 results in insufficient and incomplete N-glycosylation of glycoproteins.

The first patient with a deficiency in phosphoglucomutase was reported in 1963, with an additional patient reported in 1988; in 2009 this deficiency was categorized as a glycogen storage disorder4–6. Further analysis of patients with PGM1 deficiency revealed that all had defects in transferrin glycosylation, which caused the disorder to be properly classified as a CDG2. There are 57 confirmed cases to date, but the overall prevalence of the disease is unknown7. Clinical characteristics of PGM1-CDG are often apparent in infancy and may include facial malformations (cleft palate and/or uvula), episodic low blood sugar (hypoglycemia), problems with the heart (cardiomyopathy) and liver (hepatopathy)8. Slow growth and endocrine problems are also common. Muscular problems, such as exercise intolerance and rapid muscle cell break down (rhabdomyolysis), are very common. Neurological symptoms occur in less than half of PGM1-patients, but may consist of mild to moderate intellectual impairment, movement delay, and seizures7,9,10. Patients with mild PGM1-CDG may go undiagnosed into adulthood. A diagnosis can be determined through transferrin analysis and direct assessment of PGM1 enzymatic activity, but definitive diagnosis is often achieved through genetic testing. Dietary galactose therapy has proven effective at treating PGM1-CDG and is especially important for development in younger patients1,3,11–16.

PGM1-CDG is an autosomal recessive disorder, meaning an affected individual inherits one defective copy of the gene from each asymptomatic parent.

The PGM1 gene encodes a mutase enzyme, phosphoglucomutase 1 (PGM1).  Mutases are enzymes that facilitate the movement of part of a molecule from one place to another on the same molecule. PGM1 is located in the cytoplasm where it has a pivotal role in glucose metabolism2,3,13. It also affects the generation of the activated sugars involved in the synthesis of glycan chains that may be attached to various proteins and lipids (Figure 1). 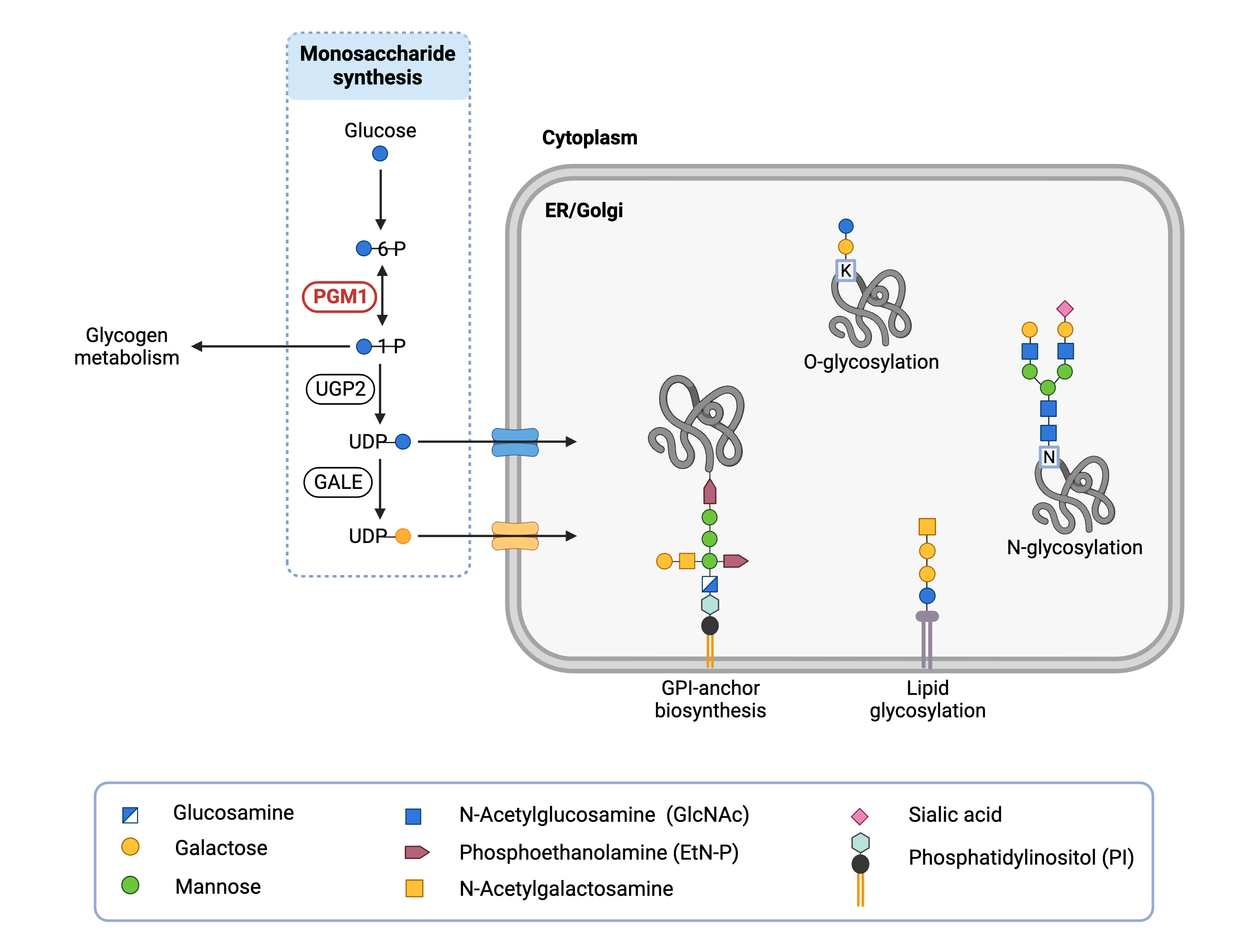 Figure 1. Role of PGM1 in glycosylation.
PGM1 converts glucose-6-phosphate to glucose-1-phosphate, which is used in glycogen metabolism and is needed to make UDP-glucose. UDP-glucose is a precursor for UDP-galactose. PGM1 maintains UDP-glucose and UDP-galactose supply levels, which are used to attach glucose and galactose, respectively, to proteins and lipids in a variety of glycosylation pathways.

The monosaccharide glucose is an important component of glycans that are attached to various proteins and lipids. Before glucose can be incorporated into glycans, it must be converted to the activated sugar UDP-glucose in the cytoplasm. By maintaining adequate levels of glucose-1-phosphate, PGM1 facilitates the synthesis of UDP-glucose, which is formed by the action of the enzyme UDP-glucose pyrophosphorylase 2 (UGP2) on glucose-1-phosphate. UDP-glucose is an important precursor for two additional activated sugars: dolichol-P-glucose, the glucose donor inside the ER, and UDP-galactose. UDP-glucose 4-epimerase (encoded by GALE) converts UDP-glucose into UDP-galactose, which is used in the attachment of galactose to glycans. Thus, adequate PGM1 activity is important for maintaining sufficient levels of several different activated sugars.

The activated sugars Dol-P-glucose, and UDP-galactose are particularly important for the synthesis of N-linked glycoproteins. The first step of N-glycosylation is the building of a mannose-rich lipid-linked oligosaccharide (LLO) comprised of a 14-sugar oligosaccharide and dolichol pyrophosphate (Dol-PP). The oligosaccharide component, also referred to as the oligosaccharide precursor, is subsequently transferred en bloc to an asparagine residue of a protein inside the ER. The synthesis of the LLO occurs through a stepwise process, where sugar subunits are added one-at-a-time. The final three sugars that are added prior to its transfer to the protein are glucose residues obtained from Dol-P-glucose. After the oligosaccharide has been transferred to the glycoprotein, the N-glycan undergoes additional modifications in the ER and Golgi, which may include the addition of galactose residues using UDP-galactose.

Mutations in the PGM1 gene lead to the production of an abnormal enzyme with severely reduced activity. PGM1 deficiency prevents the conversion of glycogen, normally stored in the liver and muscle cells, into glucose-6-phosphate which is used to provide energy for cells via glycolysis3,8. This imbalance in glucose metabolism results low blood sugar, which can lead to reduced growth and can be damaging to the brain10.  In PGM1 deficiency, muscles cannot rely on glycogen for energy, making it harder to sustain exercise; this can be particularly problematic for the muscles of the heart6,15,18,19. Under conditions of stress, normal PGM1 also binds to a heart muscle protein (ZASP) that is critical for force transduction (e.g. pumping) in order to supply it with constant energy20. Mutations that cause structural changes to PGM1 may prevent this interaction, and inhibition of this interaction is associated with dilated cardiomyopathy.

The PGM1 gene is located on Chromosome 1 (1p31.3) and 43 mutations have been reported in PGM1-CDG patients, which may lead to truncated or poorly folded proteins with activity between 0.3% to 20% compared to normal baseline17,20–23. Whereas some mutations may directly impact the catalytic activity of PGM1, other mutations that cause improper folding can reduce the solubility of the protein and lead to the formation of protein aggregates. There is no significant correlation between genotype or residual enzyme activity and phenotype7,24.

Patients with PGM1-CDG may display a wide range of symptoms with varying severity, but the most frequent symptoms are muscle problems and congenital malformations2,7,8. Previously, it was thought that PGM1-CDG was not associated with issues in the central nervous system (CNS), but more thorough analysis of literature reports of patients revealed that CNS symptoms are present in approximately 40% of cases10. Some common features of PGM1-CDG are obvious from birth and in early childhood, but patients with mild disease may go undiagnosed until adulthood.

PGM1-CDG should be suspected in any multisystem disorder, especially in infants that present with cleft palate, liver function abnormalities, hypoglycemia, dilated cardiomyopathy, and delayed growth7,8,25. Adults with mild disease may present with exercise intolerance and rhabdomyolysis6,19,20. Screening in suspected patients typically begins with a blood test to analyze serum transferrin isoforms. Direct assessment of PGM1 enzymatic activity may also be used and is often performed after a transferrin analysis displays a mixed type I/II pattern. However, genetic testing is used to definitively diagnose PGM1-CDG.

Individuals with PGM1-CDG usually show a mixed type I/II pattern by transferrin isoelectric focusing (TIEF) or mass spectrometry analysis of transferrin. These patterns are observed in CDG that arise due to defects in both LLO assembly in the ER and N-glycan processing in the Golgi. In PGM1-CDG, transferrin often has missing glycan chain and/or truncated glycan chains that lack galactose1,8,13. However, patients may display either a type I pattern or a type II pattern, necessitating the use of genetic testing for definitive diagnosis7.

Direct analysis of PGM1 activity can be measured in fibroblasts or leukocytes (white blood cells), with patient levels less than 20% of normal7. Red blood cells cannot be used as these cells lack PGM1.

Transferrin is both a diagnostic and therapeutic biomarker for PGM1-CDG.  Transform glycan isoforms have been shown to normalize over time in patients receiving oral d-galactose supplementation32.

PGM1-CDG is a disorder multiple glycosylation pathways, and more specifically a disorder of monosaccharide interconversion.

PGM1-CDG prognosis can vary depending on the severity of the disease, and some patients may be undiagnosed until adulthood. Congenital malformation and dilated cardiomyopathy are associated with more severe illness24. Cardiac complications have proven fatal for PGM1-CDG patients over a wide age range (early childhood to adulthood) and patients may require a heart transplant7,8,25,26. The oldest PGM1-patient reported in the literature was 49 years old as of 201927.

Management of PGM1-CDG requires a multidisciplinary team and may include combinations of corrective surgery, physical therapy, occupational therapy, cardiological intervention, and speech therapy. IV glucose and oral sucrose administration during exercise can improve exercise tolerance in a PGM1-CDG patient18,19.

Unlike most CDG, PGM1-CDG has an effective treatment in the form of galactose supplementation. Other treatments including gene therapy are currently being explored.

Oral supplementation of galactose between 0.5 – 3 g per kg bodyweight per day (up to 50 g per day) has been successfully used to treat many of the symptoms of PGM1-CDG7. Marked improvement is seen in exercise intolerance, frequency of hypoglycemia, delayed puberty and hypogonadism, growth, and biochemical abnormalities including liver transaminases and clotting factors1,3,11–15,25. Transferrin glycosylation also normalizes with treatment. Galactose supplementation works by replenishing levels of UDP-galactose and UDP-galactose, which are necessary for normal glycosylation in the ER and the Golgi. The additional supplementation of glucose or uridine alongside galactose have been explored as ways to improve exercise tolerance or increase UDP-galactose synthesis, respectively8,16,18. Although concurrent glucose supplementation during exercise is effective, uridine+galactose supplementation has only proven effective at restoring glycosylation in patient fibroblasts8,16. Due to its overall low toxicity and effectiveness, high-purity D-galactose (CERC-801) is being explored by Cerecor for the treatment of PGM1-CDG, and has received fast track designation by the FDA.

Despite its effectiveness at alleviating multiple symptoms and biochemical abnormalities, galactose supplementation is not a perfect treatment. It requires daily large consumption of galactose sugar, and large doses may not always be tolerated. As well, there is a report of the benefits of galactose consumption may wearing off after 18 months of treatment in a PGM1-CDG patient16. Finally, galactose supplementation is ineffective at treating the cardiac manifestations of PGM1, potentially because it is unable to restore the interaction between PGM1 and ZASP in heart muscle tissue25.

The Lai lab at the University of Utah Health is currently developing gene replacement therapy for PGM1-CDG.

Clinical and Basic Investigations into Congenital Disorders of Glycosylation (NCT04199000)
The Frontiers in Congenital Disorder of Glycosylation Disorders Consortium (FCDGC) is conducting a 5-year natural history study on all CDG types, including PGM1-CDG. The purpose of this study is to define the natural history and clinical symptoms of CDG, develop new diagnostic techniques, identify clinical biomarkers that can be used in future clinical trials and evaluate whether dietary treatments improve clinical symptoms and quality of life.

Fat and Sugar Metabolism During Exercise in Patients with Metabolic Myopathy
Rigshospitalet in Denmark was conducting a study to analyze the metabolic abnormalities that occur during exercise in 21 different metabolic myopathies, including PGM1-CDG. The status of this trial is unknown.