O-linked protein glycosylation (or O-glycosylation) is a process where sugars are attached to the oxygen atom of certain amino acid residues in proteins – mainly serine and threonine, as well as others, such as tyrosine and hydroxylysine1–3. O-glycosylation happens once a protein has been synthesized and takes place primarily in the endoplasmic reticulum (ER) and Golgi Apparatus (Golgi); in some cases, it can also occur in the nucleus, cytoplasm, or mitochondria4,5. O-glycosylation is initiated by seven different monosaccharides that can be further extended to form longer sugar chains called O-glycans6. O-glycans are needed for protein folding and stability, as well as biological processes, such as cell signalling, cell attachment, and cell recognition7,8. Mutations in the genes involved in O-glycosylation can lead to CDG, which are classified as disorders of O-linked protein glycosylation.

There are seven different types of O-glycosylation which are classified based on initial monosaccharide that is attached to amino acid residue in the protein (Figure 1). These O-glycosylation types (and corresponding sugar) include9:

Most O-glycosylation pathways can be divided into the following steps:

Generation and Transportation of Activated Sugars

Before O-glycosylation can occur, cells must generate high-energy (reactive) forms of monosaccharides, called activated sugars7. Activated sugars are also called glycosyl donors or sugar donors because they enable sugars to be added onto other molecules (Figure 2). Monosaccharides are activated by forming high-energy bonds to nucleosides (forming nucleotide sugars) or to dolichol phosphate (a lipid embedded in the ER membrane)10. 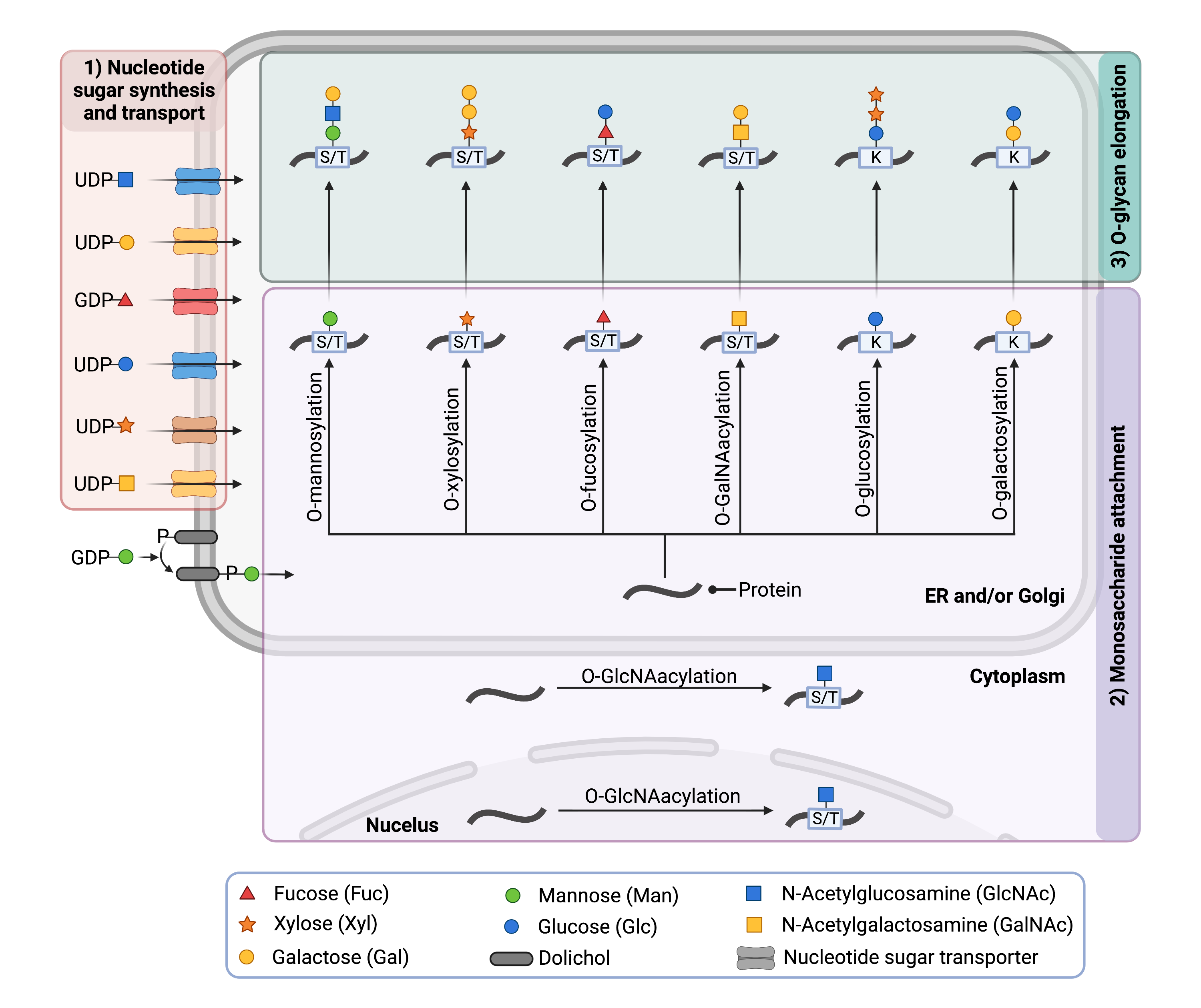 Enzymes called glycosyltransferases transfer the monosaccharide from the activated sugar to serine and threonine (or, to a lesser extent, tyrosine or hydroxylysine) residues on newly synthesized proteins—this process is called O-glycosylation9. O-glycans can be further elongated in the Golgi to generate complex O-glycan structures. As proteins travel through the compartments of the Golgi, additional monosaccharides are added to the growing glycan chain by glycosyltransferases12. Other modifications may involve adding sulfates (sulfotransferases), adding or removing phosphate groups (kinases or phosphatases, respectively), or altering the configuration of the monosaccharide (epimerases)14–17. Synthases are used in O-glycosylation to generate substrates, such as monosaccharide-based substrates18.

Disorders of O-glycosylation arise from abnormalities in O-glycosylation pathways, and 47 are currently known. Most O-linked CDG are inherited in an autosomal recessive fashion, with affected individuals receiving one defective allele from each asymptomatic parent19.

O-linked CDG that have been identified to date include: 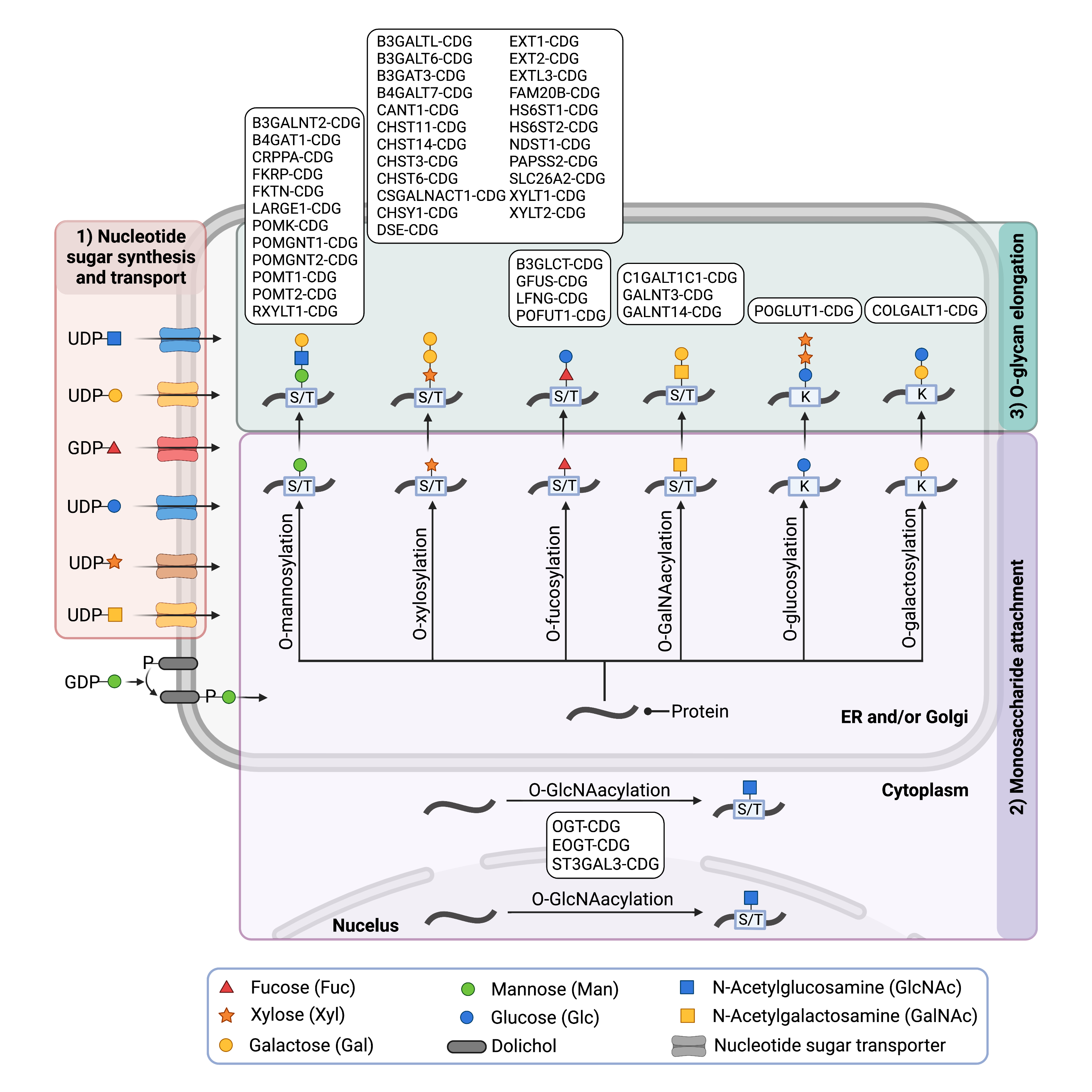 Figure 3. Overview of CDG involving O-glycosylation Defects.
O-linked CDG may be classified into groups based on the type of O-glycan that is affected.

Disorders of O-mannosylation are caused by mutations in genes that encode proteins involved in the attachment of mannose onto proteins and the elongation of glycan chains on O-mannosylated glycoproteins7. These disorders particularly impact alpha-dystroglycan, a heavily O-mannosylated glycoprotein. Cells use alpha-dystroglycan to interact with their surroundings, such as cell attachment and cellular signalling, and it is particularly abundant in skeletal muscle and the brain21. Alpha-dystroglycan must be sufficiently glycosylated for attachment and signalling22. Thus, disorders of O-mannosylation are typically associated with dystroglycanopathies, the term given to the group of diseases that develop from insufficient glycosylation levels of alpha-dystroglycan23. These disorders have a unique presentation that affects the muscles and may range from severe muscular dystrophy to milder muscle abnormalities. As with many CDG, the clinical presentations may include brain and eye abnormalities21.

Disorders of O-mannosylation include the following:

Disorders of O-xylosylation are caused by mutations in genes that encode proteins involved in the attachment of xylose onto proteins and the building up of the glycan chains on O-xylosylated glycoproteins, as well as nucleotide sugar transporters that ensure adequate supply of sugars needed for O-xylosylation. These defects can impact the biosynthesis of glycosaminoglycans (also referred to as GAGs) which are long glycan chains with repeating glycan structures that are often attached to proteins, forming proteoglycans. Some types of glycosaminoglycans have a xylose residue at the end of their glycan chains, which is attached to the protein when generating the corresponding proteoglycan24. Proteoglycans are used in a variety of biological processes, including cell signalling, cell attachment and development24,25.

Abnormalities in O-xylosylation (GAG biosynthesis) can cause disorders, such as hereditary multiple exostoses and Ehlers–Danlos syndrome26,27, and include:

Disorders of O-GalNAcylation are caused by mutations in genes that encode for proteins involved in the attachment of N-acetylgalactosamine (GalNAc) onto proteins and the building up of the glycan chains on O-GalNAcylated glycoproteins. CDG caused by defects in O-GalNAcylation include30–32:

The only currently known disorder of O-glucosylation arises from mutations in POGLUT1, a gene encoding a glucosyltransferase that transfers glucose onto serine residues of some proteins, which can cause muscular dystrophy and Dowling-Degos disease 432,35. The corresponding CDG is known as:

The only currently known disorder of O-galactosylation arises from mutations in COLGALT1, a gene encoding a galactosyltransferase that transfers galactose onto a hydroxyline residues of collagen. Mutations in COLGALT1 cause brain small vessel disease 3, a disorder resulting from fragile cerebral vessels36. The corresponding CDG is known as:

Diagnosis of O-linked CDG is achieved by conducting a series of tests which can help narrow down which part of the glycosylation pathway is affected and potentially identify individual CDG. O-linked glycosylation disorders cannot be detected with transferrin analysis, as the transferrin protein is only modified with N-glycans (glycans linked to proteins through a nitrogen atom on asparagine residues). However, patients may be assessed for abnormalities with O-glycosylated proteins, such as apolipoprotein C-III, or by analysis of analysis of total O-glycan content present in plasma or serum38. O-glycan defects linked to alpha-dystroglycanopathies (disorders of O-mannosylation), can be identified by specialized staining techniques that use antibodies to bind to glycosylated alpha-dystroglycan39. Disorders affecting GAG biosynthesis (disorders of O-xylosylation) can also be identified using experiments that use antibodies to detect defects in O-linked proteoglycans40. However, diagnosis of suspected individuals with O-linked glycosylation disorders typically relies on genetic testing strategies41.

Apolipoprotein C-III (apo C-III) is a glycoprotein found in the blood that has a single O-linked glycan (a core 1 mucin-type O-glycan) attached to a threonine residue (Figure 4) 42. Analysis of apolipoprotein C-III can reveal disorders involving O-GalNacylation 43. ApoC-III can exist in three isoforms (glycofoms) with different numbers of sialic acid residues, including zero (apoC-III0), one (apoC-III1) or two (apoC-III2) sialic acid residues44. 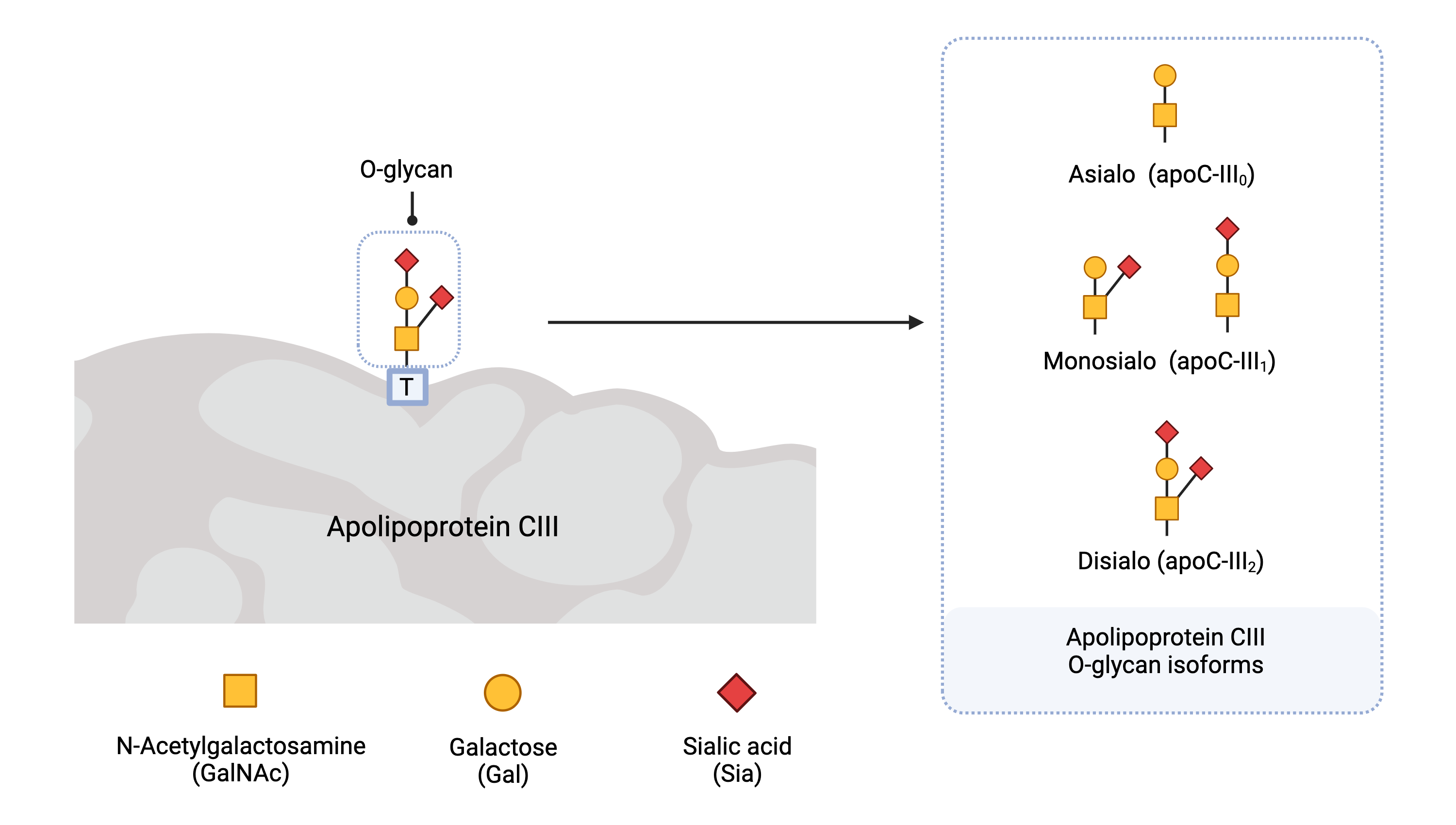 CDG that arise from defects in O-GalNAcylation or defects in Golgi homeostasis have increased levels of apo C-III0 and/or apo C-III145. These can be detected by different methods, such as isoelectric focusing (IEF) (Figure 5), two-dimensional gel electrophoresis, capillary electrophoresis and mass spectrometry45,46.