DPM1-CDG, formerly known as CDG-Ie, is a rare inherited condition that is mainly associated with seizures, developmental delay and small head size at birth. To date, 13 cases of DPM1- CDG have been reported in the literature. DPMI-CDG is classified as a disorder of multiple glycosylation pathways and can be subcategorized as a disorder of dolichol metabolism. DPM1-CDG is caused when an individual has mutations in both copies of the DPM1 gene which provides instructions to for making part of an enzyme that generates the sugar donor molecule dolichol-phosphate-mannose (Dol-P-mannose). Dol-P-mannose is used to donate mannose sugars onto growing sugar chains during protein and lipid glycosylation. Mutations in the DPM1 gene cause some proteins and lipids to have incomplete or absent sugar chains. Common clinical features of individuals affected by DPM1-CDG include developmental delay, seizures, small head size at birth, decreased muscle tone (hypotonia), eye and visual defects, blood clotting defects, and elevated creatine kinase and serum transaminases; these symptoms typically present in infancy. Screening tests are available for DPM1-CDG, but a definitive diagnosis is achieved through genetic testing. Currently, DPM1-CDG does not have any treatments available.

Dolichol-phosphate-mannose synthase subunit 1 congenital disorder of glycosylation (DPM1-CDG) is a rare autosomal recessive disorder that arises from defects in the DPM1 gene. DPM1 encodes a catalytic subunit of the enzyme: dolichol-phosphate-mannose synthase (DPM synthase)1. DPM synthase transfers mannose from the nucleotide sugar GDP-mannose to dolichol-phosphate (Dol-P), forming Dol-P-mannose2. Dol-P-mannose is a mannose donor used in the construction of the lipid-linked oligosaccharide during N-glycosylation and is also used as a mannose donor in O-glycosylation, C-mannosylation and GPI-anchor protein biosynthesis. Deficiency in DPM1 results in insufficient glycosylation of proteins and GPI-anchor proteins3.

DPM1-CDG was first clinically reported in 20004,5. Altogether, 13 DPM1-CDG cases have been reported in the literature, which have been confirmed by genetic testing1,2,4–8. Onset of symptoms can present from infancy, where common clinical features include developmental delay, seizures, small head size at birth, decreased muscle tone (hypotonia), eye and visual defects, coagulation defects, and elevated creatine kinase and serum transaminases—although symptoms and severity vary between affected individuals1. DPM1-CDG is typically diagnosed through a combination of biochemical (transferrin analysis and alpha-dystroglycan analysis) and genetic testing. As DPM1 affects N-glycosylation, transferrin isoform analysis is usually performed during diagnosis, with cases typically presenting with a type I pattern.1,2. However, genetic testing typically provides a definitive diagnosis.

The DPM1 gene encodes dolichol phosphate mannose synthase subunit 1 (DPM1) a subunit of the DPM1 synthase complex. The DPMI complex is located in the ER membrane and is comprised of three subunits, DPM1, DPM2 and DPM1. It is a synthase enzyme which catalyzes the transfer of mannose from the nucleotide sugar GDP-mannose to Dol-P to generate the sugar donor Dol-P-mannose9.  Dol-P-mannose is used as a sugar donor in a variety of protein and lipid glycosylation pathways, including O-mannosylation, C-mannosylation, N-glycosylation and GPI-anchor protein biosynthesis (Figure 1)1.

Dolichol is synthesised through a series of enzymatic reactions in the cytosol and ER membrane. Once dolichol is generated, it must be phosphorylated by the enzyme dolichol kinase (DOLK), generating dolichol-phosphate (Dol-P) before it can be used as a lipid carrier or monosaccharide donor11. 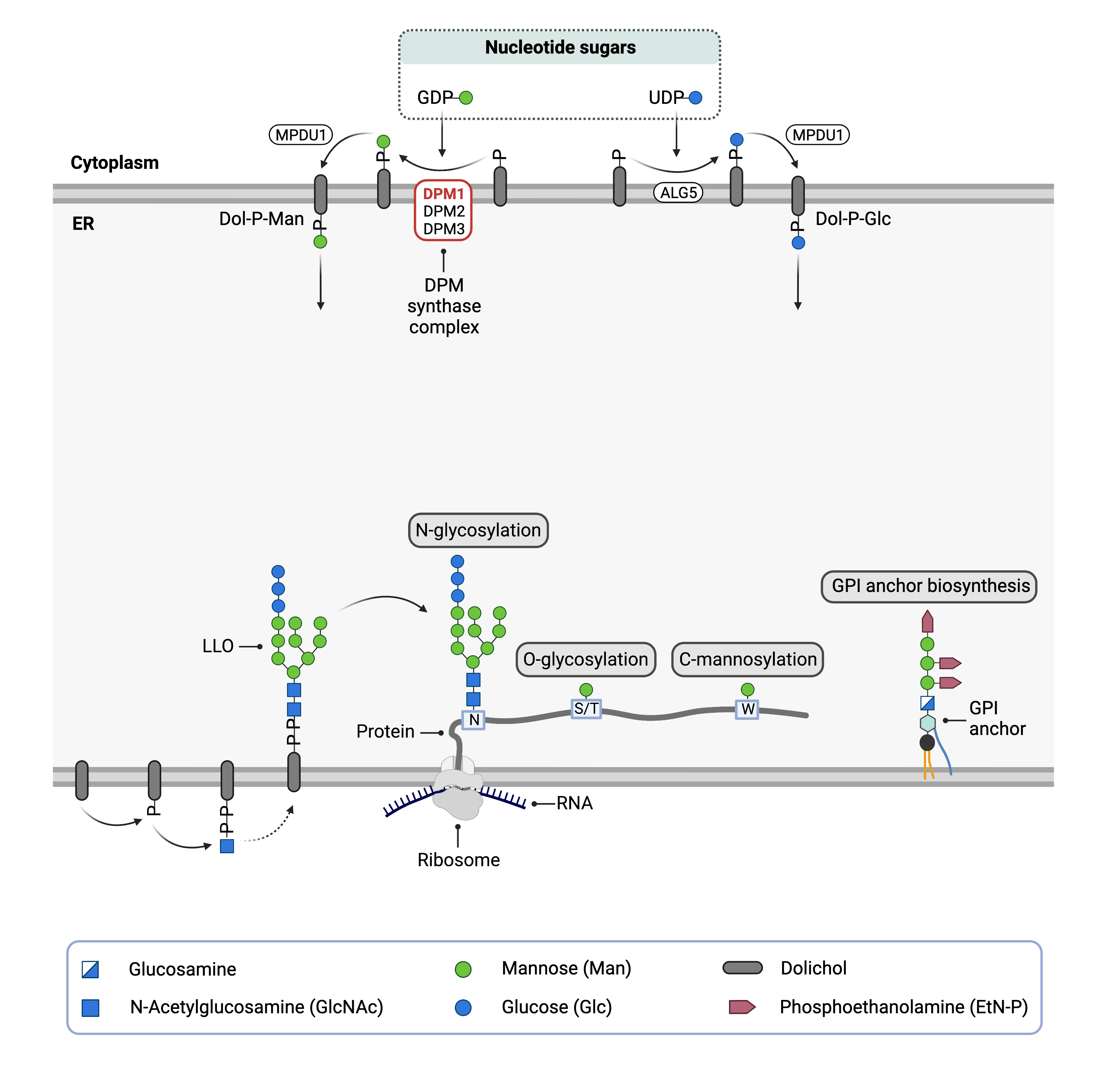 To generate sugar donors Dol-P-mannose and Dol-P-glucose, the monosaccharides must be transferred from nucleotide sugars GDP-mannose and UDP-glucose to Dol-P. The DPM1 synthase complex, comprised of subunits DPM1, DPM2 and DPM3, catalyzes the transfer of mannose from GDP-mannose to Dol-P3.  DPM1 is the catalytic domain of the enzyme complex and faces the cytoplasm whereas DPM2 and DPM3 are located in the ER membrane and help anchor and stabilize the complex9.

Individuals with DPM1-CDG can have blood clotting (coagulation) defects and elevated liver enzymes (and transaminases) and creatine kinase levels1,2.

Under the former CDG classification system, DPM1-CDG is classified as a Type 1 CDG4,5, which arise due to defects in the synthesis of N-glycoproteins that occur before the glycan is transferred from the LLO onto the protein.

DPM1-CDG should be suspected in individuals presenting with developmental delay, seizures, small head size at birth, decreased muscle tone, eye and visual defects 1. Screening in suspected patients typically begins with a blood test to analyze serum transferrin isoforms. As DPM1-CDG can present signs of dystroglycanopathies, muscle biopsies may also be assessed2. However, genetic testing is used to definitively diagnose DPM1-CDG1,2,4–8.

Individuals with DPM1-CDG show a characteristic type 1 pattern by transferrin isoelectric focusing (TIEF) or mass spectrometry analysis of transferrin14. Type 1 patterns are observed in CDG that arise due to defects in LLO assembly and are characterized by a decrease in tetrasialo-transferrin and an increase in di-sialo and a-sialo transferrin isoforms14.

Muscle biopsies can be analysed from DPM1-CDG patients using standard histological and immunological staining. In addition, samples can be probed for dystroglycanopathies by staining with anti-dystroglycan antibodies to identify dystroglycan abnormalities2.

There are limited reports of individuals with DPM1-CDG in the medical literature, which makes it difficult to determine the long-term prognosis. From these reports, DPM1-CDG symptoms and disease severity can vary, with a reported case of an affected individual who is 25 years old as of 20181,2,4–8.

There are no therapies currently available for DPM1-CDG, leading treatment to focus on managing symptoms of affected individuals.

No therapies currently exist for DPM1-CDG.

Several research models have been developed for studying DPM1, including in P. furiosus, yeast, zebrafish, and mice.

Clinical and Basic Investigations into Congenital Disorders of Glycosylation (NCT04199000)
The Frontiers in Congenital Disorder of Glycosylation Disorders Consortium (FCDGC) is conducting a 5-year natural history study on all CDG types, including ALG1-CDG. The purpose of this study is to define the natural history and clinical symptoms of CDG, develop new diagnostic techniques, identify clinical biomarkers that can be used in future clinical trials and evaluate whether dietary treatments improve clinical symptoms and quality of life.