SLC35A2-congenital disorder of glycosylation (SLC35A2-CDG), formerly known as CDG-IIm, is a rare inherited condition that affects several body systems. To-date, almost 70 cases of SLC35A2-CDG have been reported in the medical literature. SLC35A2-CDG is classified as a disorder of multiple glycosylation pathways and within this category, a disorder of nucleotide sugar synthesis and transport. It is caused by mutations in the SLC35A2 gene found on the X chromosome, which is one of the two sex chromosomes. The SLC35A2 gene provides the instructions for the body to make a protein that transports a high-energy form of the sugar galactose, called a nucleotide sugar, into the Golgi Apparatus (a compartment in the cell that is important for glycosylation). Galactose is important for many glycosylation pathways. Mutations in the SLC35A2 gene limits the amount of galactose available to be added to sugar chains in the Golgi, resulting in shortened chains. Symptoms of SLC35A2-CDG begin at infancy and are primarily characterized by developmental delay, seizures, and low muscle tone. Visual impairments, facial and bone abnormalities, and organ abnormalities may also be present in individuals with this disorder. SLC35A2-CDG is only diagnosed through genetic testing. Currently, galactose supplementation is being tested as a treatment option for SLC35A2-CDG. Present treatment is focused on the management of specific symptoms and preventing complications.

Solute Carrier Family 35 Member A2 congenital disorder of glycosylation (SLC35A2-CDG) is a rare X-linked dominant genetic disorder. The first reported case of SLC35A2-CDG was in 20131, and there are almost 70 confirmed cases to date, making it one of the more commonly diagnosed CDG2. The SLC35A2 gene encodes the UDP-galactose transporter (UGT), which transports the nucleotide sugar UDP-galactose from the cytoplasm into the Golgi where galactose can be transferred onto oligosaccharide chains on proteins and lipids. As galactose is a component of N- and O-linked glycoproteins, as well as glycosaminoglycans and glycosphingolipids, mutations in SLC35A2 affects multiple types or pathways of glycosylation, resulting in the generation of  incomplete oligosaccharides on glycoproteins or glycolipids3.

SLC35A2-CDG is primarily observed in females. Symptoms begin at infancy and the characteristic presentation includes developmental delay, seizures, decreased muscle tone, facial and skeletal abnormalities, visual impairment, and organ abnormalities3. A transferrin analysis can be used to detect SLC35A2-CDG in some cases, however results are often normal in many patients who are no longer in infancy. A definitive diagnosis can only be obtained through genetic testing3–7. No treatment is presently available for treating SLC35A2-CDG, although galactose supplementation is currently being investigated as a therapeutic option for this condition8.

SLC35A2-CDG is inherited in an X-linked dominant fashion and mainly affects females. These variants arise predominantly from de novo mutations (where the mutation occurs in the egg or sperm cell of a parent or after fertilization) but have been shown to be inherited too9–11. In almost 70 cases diagnosed to date, only 8 males have been diagnosed with SLC35A2-CDG3.

A few males are diagnosed with SLC35A2-CDG displaying mosaicism, where only a proportion of body cells are affected as the mutation is not inherited from the parent. During the early developmental stages in utero, one cell spontaneously acquires a mutation in the SLC35A2 gene, passing the mutationonto its progeny, resulting in some cells carrying the defect12. Having this mutation in all the cells is thought to be lethal13.

The SLC35A2 gene encodes the enzyme UDP-galactose transporter (UGT), which is a nucleotide-sugar transporter. It belongs to the SLC35 family of nucleotide-sugar transporters14–16, which are transmembrane proteins located on the ER and Golgi responsible for translocating nucleotide sugars from the cytosol. The SLC35A2 gene product UGT is an antiporter which transports UDP-galactose from the cytosol into the Golgi in exchange for the reaction by-product called UMP17–19. This galactose residue from UDP-galactose can be added to O-linked oligosaccharide chains or to N-linked glycans undergoing remodelling within the Golgi, meaning mutations can affect glycoprotein, glycolipid, and proteoglycan synthesis20,21. 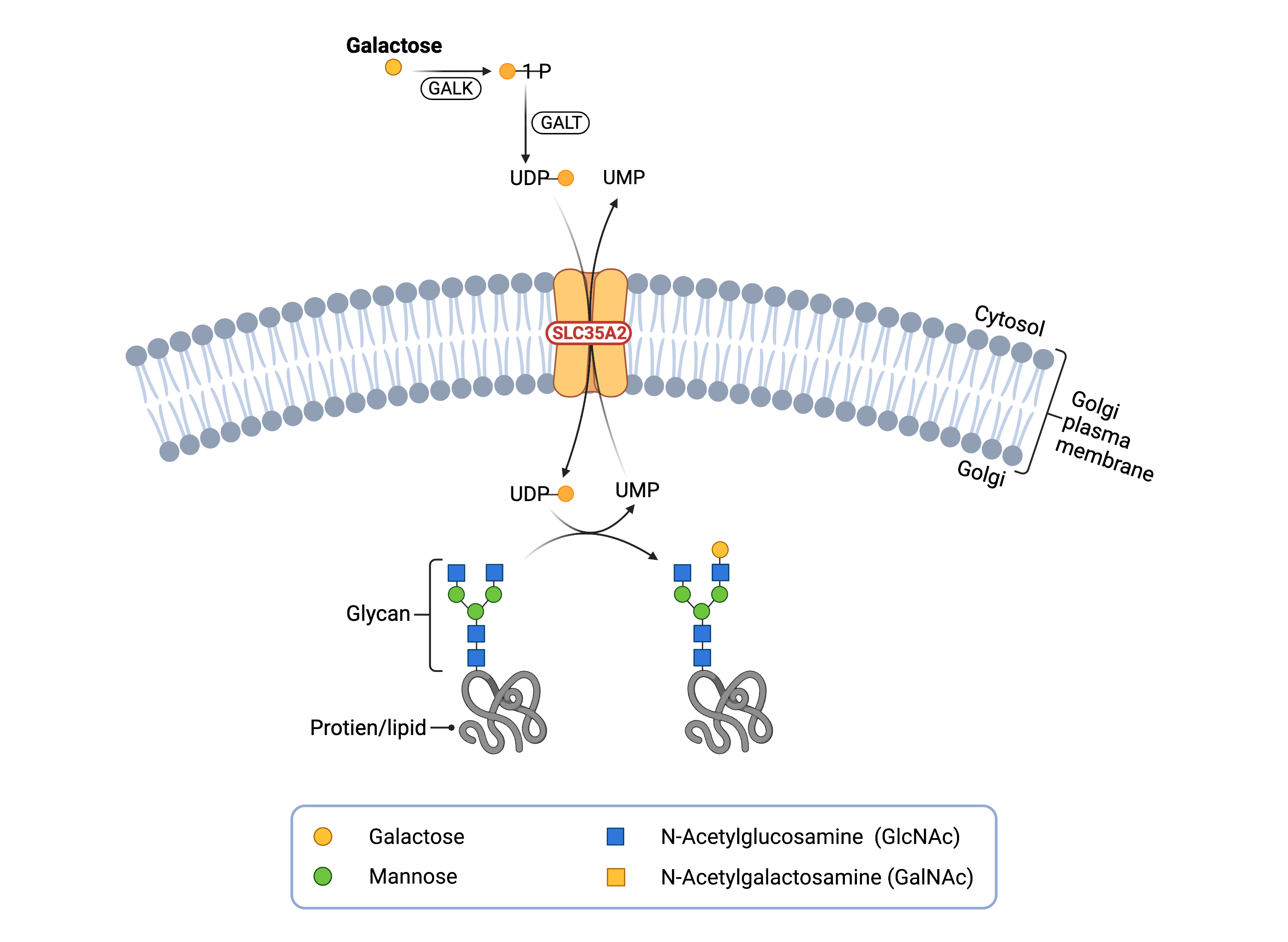 Figure 1. Role of SLC35A2 in glycosylation.
SLC35A2 is a UDP-galactose transporter, which moves UDP-galactose from the cytosol to the Golgi lumen. Galactose can be transferred from UDP-galactose to lipid and protein glycan chains.

Glycosylation occurs inside the ER and the Golgi, which are compartments that are surrounded by membranes that nucleotide sugars cannot pass through. Nucleotide sugar transporters exist in the ER and Golgi membranes to transport nucleotide sugars from the cytosol to the inside of these compartments15. After the initiation of glycosylation in the ER, glycoproteins and glycolipids can be transferred to the Golgi for further modifications, which can include elongation of the sugar chain by the addition of sugars such as galactose21.

Mutations in the SLC35A2 gene result in impaired UGT, restricting the amount of UDP-galactose available within the Golgi for glycosylation3. Defective UGT can restrict or prevent UDP-galactose from being transported into the Golgi, leading to glycans that lack galactose23.

Other observed symptoms of SLC35A2-CDG include, but are not limited to, immune defects, spinal deformities, failure to thrive in infancy, enlarged spleen, hearing problems, and functional and structural heart defects. Other noted symptoms include curvature of spine (scoliosis), inability to walk, early onset of puberty, inverted nipples, and acid reflux.

Biochemical abnormalities observed in individuals with SLC35A2-CDG may include elevated thyroglobulin levels and liver enzymes, anemia, and abnormal coagulation factors33.

SLC35A2-CDG is classified as a disorder of multiple glycosylation pathways and more specifically, a disorder of nucleotide sugar synthesis and transport.

Although diagnosis of SLC35A2-CDG may be suspected based on presentation of symptoms and a detailed patient history, genetic testing is the only definitive diagnostic test. The first-line screening tests in suspected is the analysis of serum transferrin. Measuring UDP-galactose transport activity in patient fibroblasts can also be used to identify pathogenic SLC35A2 mutations24. Although SLC35A2-CDG can also affect O-glycans, analysis of apolipoprotein C-III for O-glycan abnormalities has not been informative21,34.

Individuals with SLC35A2-CDG can show a type 2 pattern by transferrin isoelectric focusing (TIEF) and mass spectrometry, displaying a truncated pattern lacking galactose and terminal sialic acid. This pattern is caused by defects in the processing of the N-glycans attached to proteins within the Golgi, resulting in increased di-sialo and tri-sialotransferrin35–37.

Although not a routine diagnostic yet, an assay has recently been developed to assess transport of UDP-galactose by UGT into the Golgi in fibroblasts37.

A biomarker that is unique to SLC35A2-CDG has not been identified.

Prognosis of SLC35A2-CDG may vary depending on the severity of an individual’s symptoms. While symptoms can be observed in infancy, most do not get diagnosed before the age of three. SLC35A2-CDG also has a low mortality rate, with only one death reported in over 60 patients characterized so far24.

There are currently no treatment options approved for SLC35A2-CDG. However, replacement therapy consisting of oral D-galactose supplementation is presently being tested to treat this condition. In a clinical trial, supplementation with D-galactose to 10 patients improved various neurological and motor symptoms of SLC35A2-CDG, while increasing the levels of both fully formed sugars as well as galactosylated N-glycans8.

The yeast gms1 gene encodes a UDP galactose transporter and is orthologous to the human SLC35A2 gene. Mutations in this gene results in defective cellular glycosylation in yeast, with gene deletions resulting in the absence of galactose residues in glycoproteins found on the surface38.

The C. elegans gene nstp5 encodes a transmembrane UDP-galactose transporter and is orthologous to the human SLC35A2 gene. It is a potential model for the human disease SLC35A2-CDG39.

The Drosophila ugalt gene encodes a transporter involved UDP-galactose and galactose transmembrane transport40. It is orthologous to the human SLC35A2 gene, and mutations in this protein can destabilize and disrupt the localization of the transporter within in the fly41.

The slc35a2 gene in zebrafish is orthologous to the human SLC35A2 gene and could be a model for studying SLC35A2-CDG42.

Embryonic stem cell lines from mice with the Slc35a2 gene mutated have been generated43.

Clinical and Basic Investigations into Congenital Disorders of Glycosylation (NCT04199000)
The Frontiers in Congenital Disorder of Glycosylation Disorders Consortium (FCDGC) is conducting a 5-year natural history study on all CDG types, including SLC35A2-CDG. The purpose of this study is to define the natural history and clinical symptoms of CDG, develop new diagnostic techniques, identify clinical biomarkers that can be used in future clinical trials and evaluate whether dietary treatments improve clinical symptoms and quality of life.