POMT2-CDG is a rare inherited condition that affects many parts of the body. To date, there are at least 40 patients reported in the medical literature. POMT2-CDG is classified as a disorder of O-linked protein glycosylation and more specifically, a disorder of O-mannosylation. POMT2-CDG is also classified as a dystroglycanopathy, which refers to a group disorders that affect the glycosylation of the protein alpha-dystroglycan. The alpha-dystroglycan protein plays an important role in muscle, brain and eye development.  POMT2-CDG is caused when an individual has mutations in both copies of their POMT2 gene, which encodes an enzyme that attaches the simple sugar mannose to a protein during O-glycosylation. Mutations in the POMT2 gene cause proteins to be under glycosylated, meaning these proteins have less sugars attached than healthy forms of the proteins. POMT2-CDG can present as three different forms that range in severity, with symptoms beginning from birth or in adolescence depending on the form. POMT2-CDG is primarily characterized by muscle, brain, eye, and heart problems. Screening tests are available for POMT2-CDG, but a definitive diagnosis is achieved through genetic testing. Treatment is focused on the management of specific symptoms and preventing complications.

Protein O-mannosyltransferase 2 congenital disorder of glycosylation (POMT2-CDG) is a rare autosome recessive genetic disorder. The first case of POMT2-CDG was reported in 2005, and there are at least 40 reported cases in the literature to date1–9. The POMT2 gene encodes an enzyme, protein O-mannosyltransferase 2 (POMT2), which is responsible for adding the first mannose to serine or threonine residues on a protein during O-glycosylation10. Deficiency of POMT2 results in deficient O-mannosylation of the protein alpha-dytroglycan – a protein that is part of the dystrophin-glycoprotein complex that is needed for a range of roles, such as stabilizing muscle tissue and cell signalling5. POMT2-CDG is also classified as a dytroglycanopathy, which refers to a group of disorders that affect O-mannosylation of alpha-dystroglycan.

POMT2-CDG may present as three different forms; Muscular dystrophy-dystroglycanopathy type A2, -type B2 or -type C2, which vary in clinical presentation and symptom severity. The characteristic clinical presentation of POMT2-CDG includes muscle, brain, and eye problems. Definitive diagnosis can only be achieved through molecular genetic testing. There are currently no approved treatments for POMT2-CDG.

POMT2-CDG is inherited in an autosomal recessive fashion, where a mutation is inherited from each parent (asymptomatic carriers).

Figure 1.O-mannosyl glycan core structures of alpha-dystroglycan.
The o-mannosylated glycans on alpha-dystroglycan can be categorized as cores M1, M2, or M3 and can be extended by the attachment of additional monosaccharides to the glycan.

However, the first step of O-mannosylation of alpha-dystroglycan requires an initial mannose to be added to the protein. For this, the enzyme complex comprised of  POMT1 and POMT2, catalyze the transfer of a single mannose resiude from dolichol-phosphate mannose (Dol-P-Man) to a serine or threonine residue on alpha-dystroglycan in the ER10. Depending on the final structure, additional enzymes modify the O-glycan in the ER and/or Golgi (Figure 2)15. 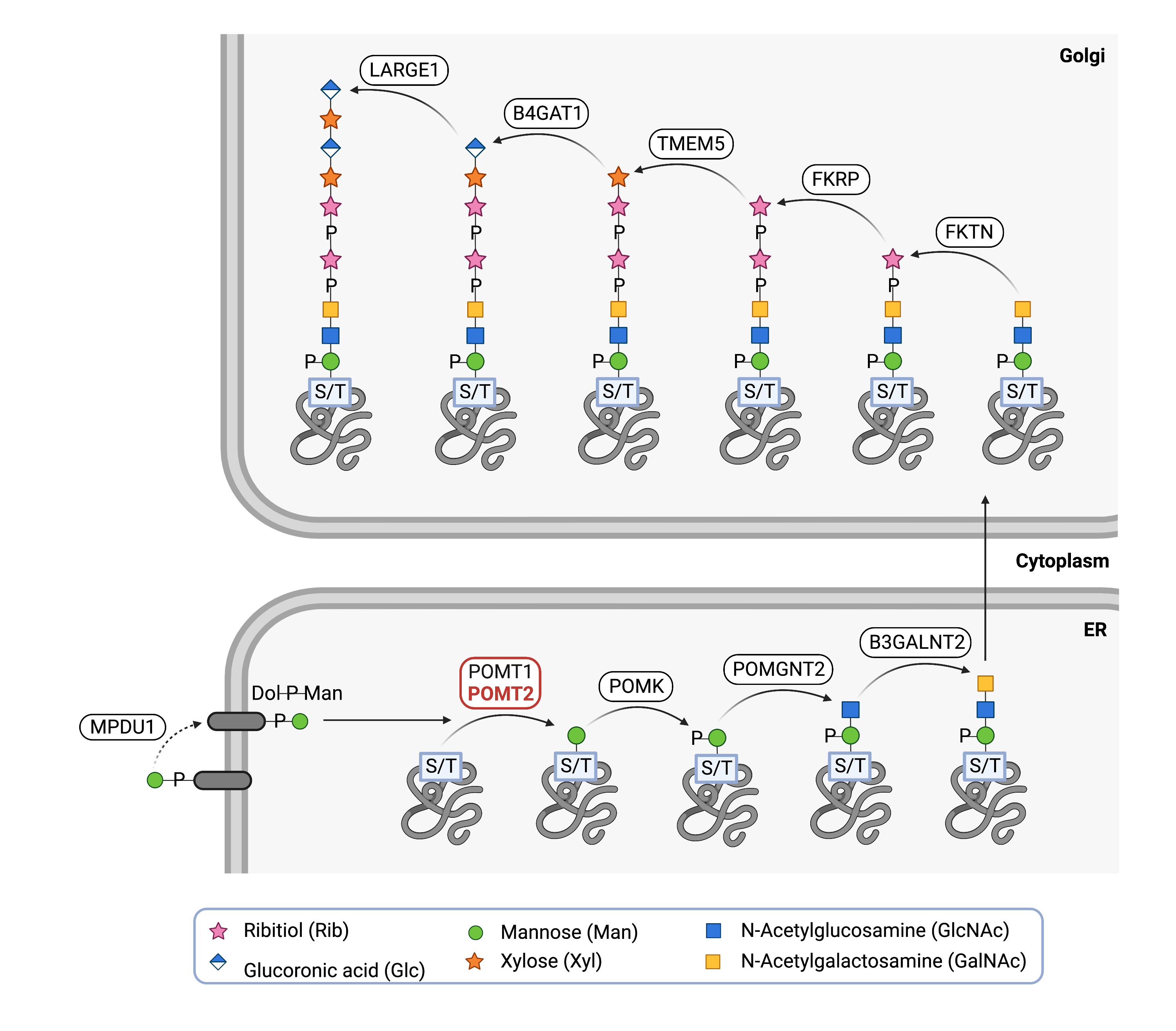 Mutations in the POMT2 gene lead to POMT2 having a reduced ability or inability to transfer mannose onto a protein during O-glycosylation. Dystroglycan (DG) is an important cell membrane glycoprotein, linking cytoskeleton of muscles and nerve cells to the extracellular matrix. α-DG is one of two subunits that is post-translationally cleaved from DG, which is O-mannosylated by POMT1 and POMT2. Hypoglycosylation of α-DG prevents the protein from functioning properly and leading to clinical features such as muscle, nerve, and eye problems observed in POMT2-CDG5.

The POMT2 gene is located on chromosome 14 (14q24.3). At least 36 pathogenic mutations have been reported for the POMT2 gene, the majority being missense mutations 2,16. The various phenotypes of POMT2-CDG are linked to the level of POMT2 activity. The more severe phenotype like Walker-Warburg syndrome is associated with nonsense mutations and splice site mutations, disrupting an important restriction site in the gene17.

Individuals with POMT2-CDG can be classified into three phenotypes which range in their severity: muscular
dystrophy-dystroglycanopathy type A2, -type B2 and -type C2.
1,17–19

MDDGA2 is a severe form of congenital muscular dystrophy-dystroglycanopathy, typically presenting prenatally or at birth with brain and eye defects. It includes disorders such as Walker-Warburg syndrome (WWS) and muscle-eye-brain disease (MEB). The clinical presentation may include a combination of:

MDDGB2 is a moderate severe form of congenital muscular dystrophy-dystroglycanopathy associated with impaired intellectual development and mild structural brain abnormalities. Symptoms typically presenting at birth or in infancy. The clinical presentation of MDDGB2 is milder than MDDGA2; it may include a combination of:

Although diagnosis of POMT2-CDG may be suspected based on the presentation of symptoms and a detailed patient history, direct molecular genetic testing is the only definitive diagnostic test. Screening tests in suspected patients can involve immunostaining of alpha-dystroglycan from muscle cell samples.

There are currently no biomarkers for POMT2-CDG.

Prognosis of POMT2-CDG may vary depending on the severity of an individual’s symptoms and the form of the disease.

Most severely affected patients (Walker-Warburg syndrome) cannot obtain mobility and do not survive beyond 1-3 years of age. In the case of the second severe form of POMT2-CDG (muscle-eye brain disease), some patients may achieve the ability to walk, but will have language and intellectual disability16.

The mildest form (LGMD type 2N), presents with late onset and mild muscle weakness16. Patients with this form of POMT2-CDG have been reported in live into adulthood, with the oldest patient recorded at 63 years old20.

There are currently no treatment options available for POMT2-CDG. Treatment is focused on the management of symptoms and prevention of complications.

Several POMT2 models have been generated, such as in flies, fish, mice, and human cells.

Drosophila gene dPOMT2 is orthologous to human POMT2. Glycosylation of Dg by POMT1 and POMT2 are important to Dg function in maintaining cell integrity in the muscles of larval Drosophila. Mutations in dPMOT1 in larvae show defects in muscle attachment and contraction in phenotypes with impaired or hypoglycosylated dystroglycan21.

The POMT2 orthologue has been identified in zebrafish26.

Human Embryonic Kidney Stem Cells (HEK293T)
Plasmids with POMT1 and POMT2 transfected into HEK293T cells showed that POMT1 and POMT2 must be co-expressed to form an active enzyme complex29.

Clinical and Basic Investigations into Congenital Disorders of Glycosylation (NCT04199000)
The Frontiers in Congenital Disorder of Glycosylation Disorders Consortium (FCDGC) is conducting a 5-year natural history study on all CDG types, including POMT2-CDG. The purpose of this study is to define the natural history and clinical symptoms of CDGs, develop new diagnostic techniques, identify clinical biomarkers that can be used in future clinical trials and evaluate whether dietary treatments improve clinical symptoms and quality of life.