PIGT-CDG is a rare inherited condition that affects several systems in the body. To date, 50 patients with PIGT-CDG have been reported in the medical literature. PIGT-CDG is also commonly referred to as PIGT deficiency or Multiple Congenital Anomalies-Hypotonia-Seizures syndrome type 3 (MCAHS3). PIGT-CDG is classified as a disorder of GPI anchor biosynthesis. It is caused when an individual has mutations in both copies of their PIGT gene, which provides instructions for making a protein that participates in attaching GPI anchors to proteins. GPI anchors are molecules that “anchor” certain proteins to the cell surface. The PIGT protein is involved in stabilizing the cell machinery that attaches GPI anchors to proteins. Mutations in the PIGT gene cause defects in GPI-anchored proteins, making them unstable or unable to attach to the cell surface. Symptoms of PIGT-CDG begin in infancy and are primarily characterized by intellectual disability, reductions in brain size, epilepsy, reduced muscle mass, and vision problems. Skeletal and joint problems, as well as facial abnormalities, may also be present in some individuals with this disorder. Some individuals diagnosed with PIGT-CDG may have a lower life expectancy due to complications. PIGT-CDG is usually diagnosed through genetic testing, however testing for the presence of GPI-anchored proteins on certain blood cells can also help screen for PIGT-CDG. With the exception of ketogenic diets, which may reduce seizures, there are currently no approved treatments for PIGT-CDG. Present treatment is focused on the management of specific symptoms and preventing complications.

Phosphatidylinositol glycan class T congenital disorder of glycosylation (PIGT-CDG) is a rare autosomal recessive genetic disorder. The first reported case of PIGT-CDG was in 2013, and there are now 50 confirmed cases to date1–11. PIGT-CDG is also commonly referred to as PIGT deficiency or Multiple Congenital Anomalies-Hypotonia-Seizures syndrome type 3 (MCAHS3).

The PIGT gene encodes a subunit of the enzyme complex that catalyzes the attachment of GPI anchors to proteins during GPI-anchored protein biosynthesis. GPI anchors are an important mechanism of attachment for proteins to the cell surface, and these proteins are known as GPI-anchored proteins. Mutations in PIGT result in defects in GPI-anchored proteins, which are critical to the development and function of many organs, especially the nervous system12. Combined somatic and germline mutations in PIGT alleles have been identified in patients with paroxysmal nocturnal hemoglobinuria (PNH), a rare acquired blood disorder13.

Symptoms begin at infancy and the characteristic presentation includes intellectual disability, developmental delay, seizures, epilepsy, facial abnormalities as well as decreased muscle tone2,14. Although a definitive diagnosis can only be achieved through genetic sequencing, analyzing blood cells for an absence of GPI-anchored proteins can help diagnose disorders of GPI anchor biosynthesis15. No treatment is currently available for PIGT-CDG, and treatment consists of management of symptoms while preventing complications.

PIGT-CDG is an autosomal recessive disorder, meaning an affected individual inherits one defective copy of the gene from each asymptomatic parent.

The GPI core structure consists of phosphatidylinositol (PI), glucosamine (GlcN), three mannose sugars (Man3), and three phosphoethanolamine (EtN-P) connected to each other in that sequence (Figure 1). GPI-anchored proteins are attached to the GPI by forming a bond between the EtN-P group of the GPI core and the C-terminus of newly synthesized proteins in the ER lumen17. 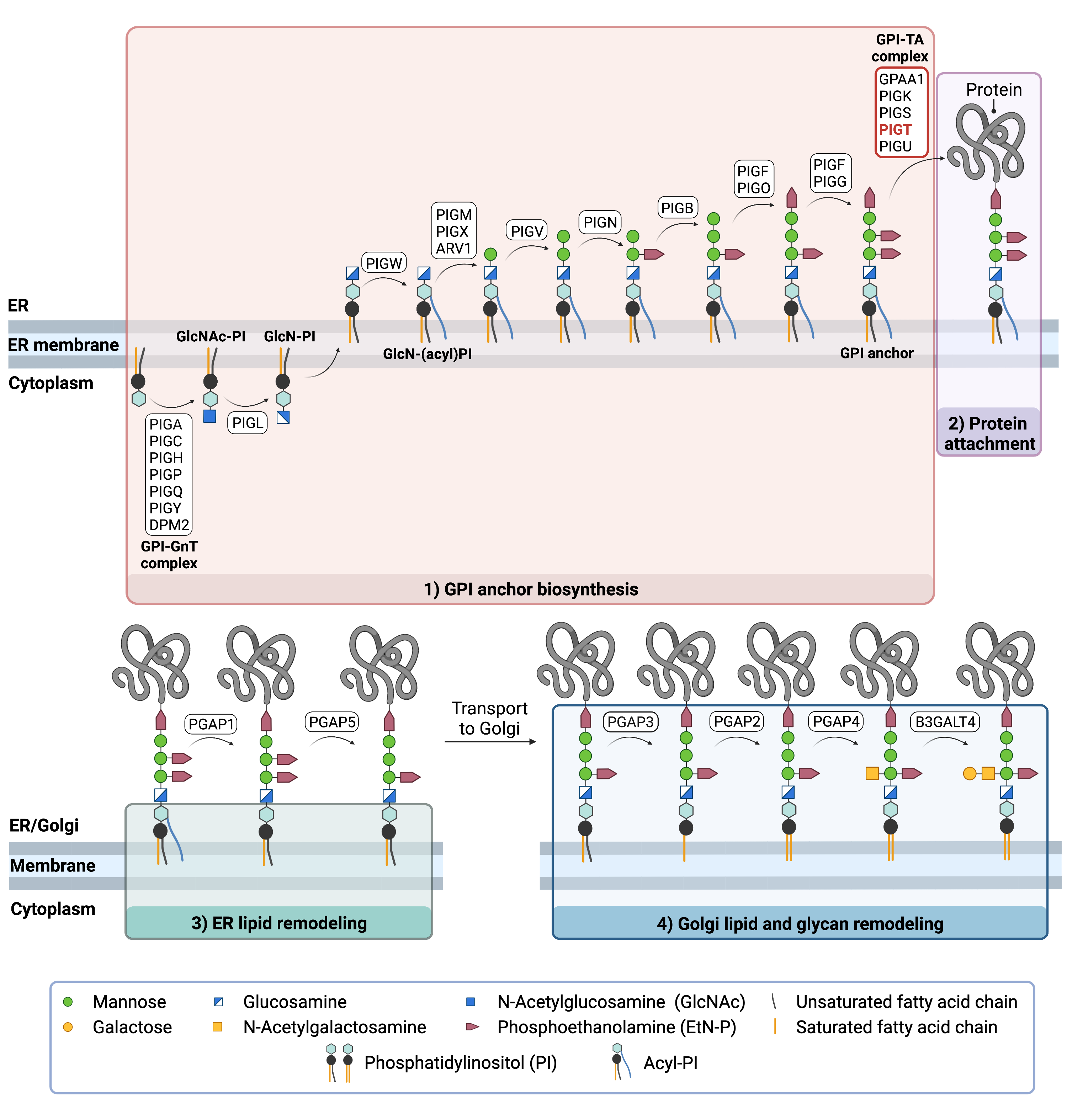 Figure 2. Overview of GPI-anchored protein biosynthesis.
GPI-anchored protein biosynthesis relies on a series of enzymatic reactions. First, the GPI anchor core is built on the ER membrane, where enzymes modify the lipid and glycan portions, generating
PI-GlcN-Man3-EtN-P. The protein is then attached to the GPI anchor in the ER, before further modifications are made to the lipid and glycan portions in the ER and the Golgi.

After the protein has been attached to the GPI anchor, both the glycan and lipid portion of the anchor undergo modifications (referred to as remodeling) in the ER and Golgi by post-GPI attachment to protein (PGAP) enzymes or the glycosyltransferase B3GALT4. The complete GPI-anchored protein is then transported to the plasma membrane where it associates with other GPI-anchored proteins in lipid rafts24.

Mutations in the PIGT gene lead to a reduction in functional GPI-anchored proteins, as PIGT encodes an essential subunit of the GPI transamidase complex required for attachment of GPI anchors to proteins with a GPI attachment signal2. GPI anchor proteins have several critical functions in the cell such as embryogenesis, immune response, and neurogenesis22,23.

The PIGT gene is located on chromosome 20 (20q13.12)14. To date, 13 variants in the PIGT gene have been reported, including missense and splice-site variants2. The missense variant c.1582G>A (p.Val528Met) may be associated with a milder phenotype as patients with this mutation present with treatable epilepsy2,10,25. However, broader conclusions cannot be made with the limited number of patients reported so far.

Individuals with PIGT-CDG typically develop signs and symptoms during infancy. PIGT-CDG is primarily characterized by severe to profound global developmental delay and refractory epilepsy. Symptoms of PIGT-CDG include2,3,5,7,8,25:

Biochemical abnormalities observed in some individuals with PIGT-CDG include reduced levels of alkaline phosphatase in the blood, increased calcium concentrations due to bone problems, and low levels of parathyroid hormone15.

PIGT-CDG is classified as a disorder of GPI anchor biosynthesis.

GPI-related CDG should be considered in individuals presenting with early onset severe seizure disorders and dysmorphic facial features, even if transferrin and total N-glycan analysis are normal1. As currently available screening tests for CDG will not reliably detect PIGT-CDG, diagnosis is typically achieved through genetic testing, either as part of an epilepsy panel or whole exome sequencing. PIGT-CDG may also be primarily screened for by analyzing surface GPI-anchored proteins on blood cells by flow cytometry15.

Individuals with PIGT-CDG lack GPI-anchored proteins on the surface of their granulocytes, a type of white blood cell.

There are currently no known biomarkers specific to PIGT-CDG.

Prognosis of PIGT-CDG may vary depending on severity of an individual’s symptoms. The broad clinical spectrum may result in premature death in some patients, as a result of respiratory or cardiac complications. Death has been reported as early as 6–15 months of age, while the oldest described patient in the literature is almost 30 years old2,15.

Management of symptoms may include combinations of physical therapy, occupational therapy, and palliative measures. In some patients, seizures are treatable with anti-epileptic medication2,25,26.

There are currently no treatment options available for PIGT-CDG.

Pyridoxine, a form of vitamin B6, has been investigated as a treatment for one PIGT-CDG patient with treatment-resistant epilepsy but was found to be ineffective27. Pyridoxine was investigated as a treatment for GPI disorders because it is thought that there may be a reduced level of intracellular pyridoxine, specifically in the brain, due to disrupted GPI-anchored protein function27.

Morpholino-mediated knockdown of the PIGT orthologue (pigt) in zebrafish results in defects in development such as gastrulation problems within the embryo, shortened body axes, as well as longer somites, and broad and kinked notochords, which are components of the zebrafish embryo3,14.

Pigt-/- constitutive knockout mice
Intragenic deletion of Pigt has been engineered in the mutant mice strain B6N.129S5-Pigttm1Lex, which has exons 1–3 targeted by homologous recombination. Homozygosity results in prenatal lethality, while heterozygous mice have defects in bone metabolism28,29.

Clinical and Basic Investigations into Congenital Disorders of Glycosylation (NCT04199000)
The Frontiers in Congenital Disorder of Glycosylation Disorders Consortium (FCDGC) is conducting a 5-year natural history study on all CDG types, including PIGT-CDG. The purpose of this study is to define the natural history and clinical symptoms of CDG, develop new diagnostic techniques, identify clinical biomarkers that can be used in future clinical trials and evaluate whether dietary treatments improve clinical symptoms and quality of life.