PIGA-CDG, also known as PIGA deficiency and Multiple Congenital Anomalies-Hypotonia-Seizures syndrome type 2 (MCAHS2), is a rare inherited condition that affects many parts of the body. It is one of the more common congenital disorders of glycosylation (CDG) with more than 100 cases reported to date in the medical literature. PIGA-CDG is classified as a disorder of GPI anchor biosynthesis.  PIGA-CDG is caused when an individual has a mutation in one copy of their PIGA gene (located on the X chromosome) and occurs primarily in males. The PIGA gene provides instructions for making a protein that participates in building GPI anchors which are molecules that “anchor” certain proteins to the cell surface. The PIGA protein is involved in the first step of GPI anchor synthesis where it attaches the simple sugar N-acetylglucosamine (GlcNAc) to the growing GPI anchor. Mutations in the PIGA gene cause defects in GPI-anchored proteins which make them unstable or unable to attach to the surface. Symptoms of PIGA-CDG begin at infancy and are primarily characterized by developmental delay, epilepsy, and low muscle tone. Behavioral abnormalities, skin problems, and gastrointestinal issues may also be present in some individuals with this disorder. Individuals diagnosed with PIGA-CDG often have a lower life expectancy, many of whom pass away at a very young age due to respiratory complications. PIGA-CDG is usually diagnosed through genetic testing, however testing for the presence of GPI-anchored proteins on certain blood cells can also identify PIGA-CDG. With the exception of ketogenic diets which may reduce seizures, there are currently no approved treatments for PIGA-CDG. While there are several therapies in development, currently treatment is focused on the management of specific symptoms and preventing complications.

Phosphatidylinositol glycan class A congenital disorder of glycosylation (PIGA-CDG) is a rare X-linked recessive genetic disorder. The first reported case of PIGA-CDG was in 2012, and over 100 confirmed cases have been reported to date, making it one of the more commonly diagnosed CDG1–3. PIGA-CDG is commonly referred to as PIGA deficiency or Multiple Congenital Anomalies-Hypotonia-Seizures syndrome type 2 (MCAHS2).

The PIGA gene encodes a subunit of the enzyme complex that catalyzes the first step of glycosylphosphatidylinositol (GPI) anchor protein biosynthesis. GPI anchors are an important mechanism of attachment for proteins to the cell surface, and these proteins are known as GPI-anchored proteins. Mutations in PIGA result in defects in GPI-anchored proteins, which are critical to the development and function of many organs, especially the nervous system2. Somatic mutations in PIGA have been associated with Paroxysmal Nocturnal Hemoglobinuria (PNH), a rare acquired blood disorder4,5.

As PIGA-CDG is an X-linked recessive disorder, symptoms typically only present in males2. Symptoms begin at infancy and the characteristic presentation includes developmental delay, seizures, facial abnormalities, gastrointestinal and breathing problems, as well as decreased muscle tone2,6,7. Although a definitive diagnosis can only be achieved through genetic sequencing, analyzing blood cells for an absence of GPI-anchored proteins can help diagnose disorders of GPI-anchor biosynthesis. No treatment is currently available for PIGA-CDG, although small molecule and gene therapies are in pre-clinical stages8.

PIGA-CDG is an X-linked recessive disorder, meaning an affected male inherits a single defective copy of the gene from an asymptomatic (carrier) mother 2.

The core structure of GPI consists of phosphatidylinositol (PI), glucosamine (GlcN), three mannose sugars (Man3), and phosphoethanolamine (EtN-P) connected to each other in that sequence (Figure 1). GPI-anchored proteins are attached to the GPI by forming a bond between the EtN-P group of the GPI core and the C-terminus of newly synthesized proteins in the ER lumen9.

The generation of GPI-anchored proteins is a multi-step process involving more than 30 enzymes and can be divided into the following steps (Figure 2) 10–12: 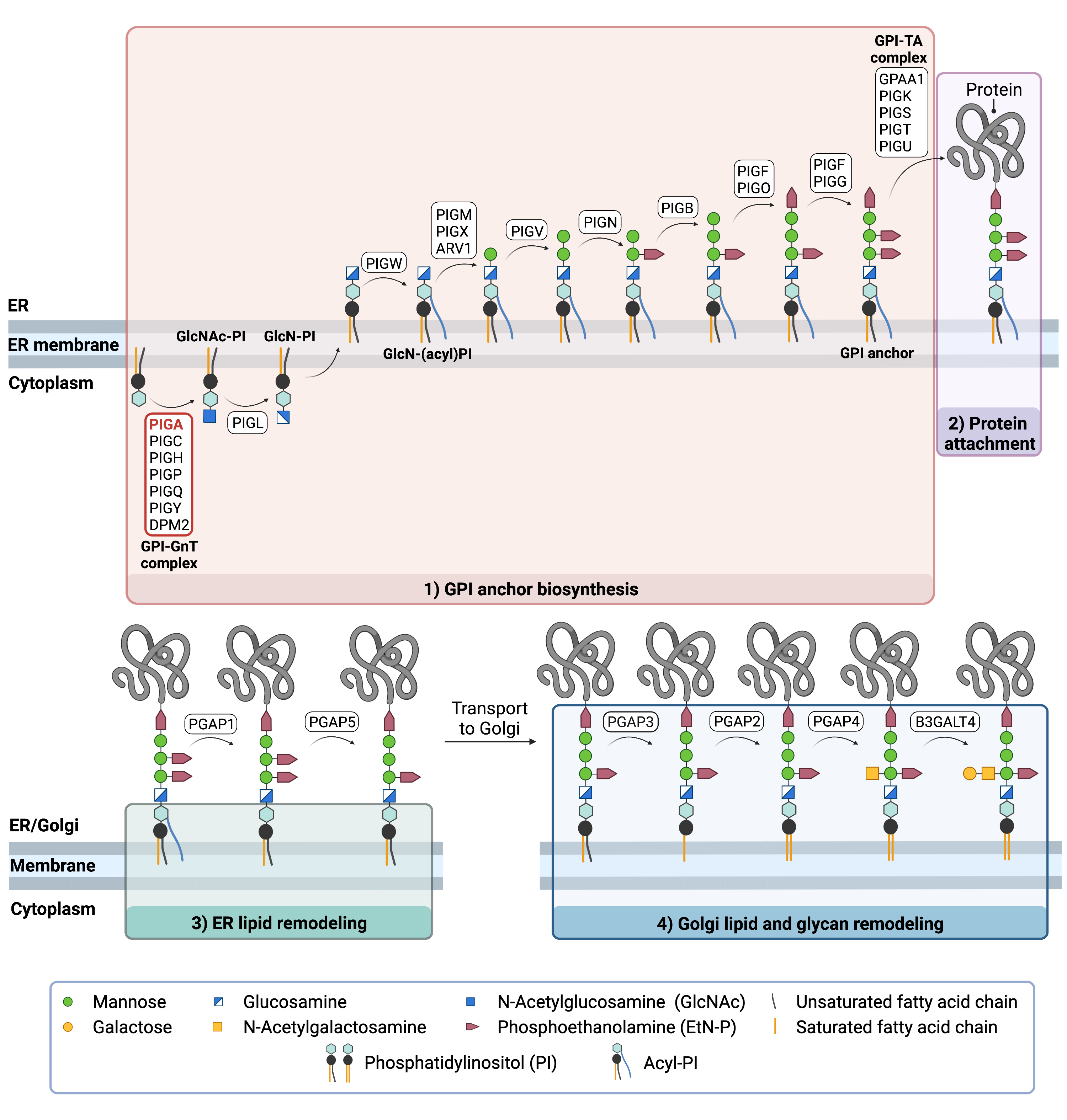 Figure 2. Overview of GPI-anchored protein biosynthesis and role of PIGA.
GPI-anchored protein biosynthesis relies on a series of enzymatic reactions. First, the GPI anchor core is built on the ER membrane, where enzymes modify the lipid and glycan portions, generating PI-GlcN-Man3-EtN-P. The protein is then attached to the GPI anchor in the ER, before further modifications are made to the lipid and glycan portions in the ER and the Golgi. PIGA is a subunit of the enzyme complex that catalyzes the first step of glycosylphosphatidylinositol (GPI) anchor protein biosynthesis.

After the protein has been attached to the GPI anchor, both the glycan and lipid portion of the anchor undergo modifications (referred to as remodeling) in the ER and Golgi by post-GPI attachment to protein (PGAP) enzymes or the glycosyltransferase B3GALT4. The complete GPI-anchored protein is then transported to the plasma membrane where it associates with other GPI-anchored proteins in lipid rafts14.

The PIGA gene is located on the X chromosome (Xp22.2). To date, 42 variants in the PIGA gene have been reported including 34 missense variants, 4 splice site variants, and 4 truncating variants. The missense and splice site variants predispose patients to premature death— reported to be mainly due to respiratory failure2,6. Among the variants identified, c.1234C > T is the most common and most of the mutations occur in the PigA domain17.

Individuals with PIGA-CDG typically develop signs and symptoms during infancy. PIGA-CDG is primarily characterized by severe to profound global developmental delay and refractory epilepsy. Symptoms of PIGA-CDG include:1,6,18–32

Biochemical abnormalities observed in individuals with PIGA-CDG include elevated alkaline phosphatase levels. Alkaline phosphatase is a GPI-anchor protein that is normally found on the cell surface but may be secreted as a soluble protein in PIG deficiencies16. This has not been documented in most patients7.

PIGA-CDG is classified as a disorder of GPI-anchor biosynthesis.

GPI-related CDG should be considered in individuals presenting with early onset severe seizure disorders and dysmorphic facial features, even if transferrin and total N-glycan analysis are normal33. As currently available screening tests for CDG will not reliably detect PIGA-CDG, diagnosis is typically achieved through genetic testing, either as part of an epilepsy panel or whole exome sequencing. PIGA-CDG may also be diagnosed by analyzing surface GPI-anchor proteins on blood cells by flow cytometry.

Individuals with PIGA-CDG lack GPI-anchored proteins on the surface of their granulocytes.

There are no currently no known biomarkers specific to PIGA-CDG.

Prognosis of PIGA-CDG may vary depending on severity of an individual’s symptoms. The broad clinical spectrum may result in premature death in some patients. Age at death ranges from 15 days to 48 years of life, with half of patients passing within the first two years of life due to respiratory failure or possible sudden and unexpected death1.

In some patients, seizures are treatable with anti-epileptic medication34. A ketogenic diet may also be used to reduce seizures1. Many children with PIGA-CDG often eventually require a feeding tube to reduce the chance of aspiration due to problems with swallowing and muscle tone abnormalities34.

There are currently no treatment options available for PIGA-CDG, though drug repurposing, small molecule (GlcNAc-PI) and gene therapy treatments are under investigation in pre-clinical research studies3,8.

Pyridoxine, a form of vitamin B6, has been investigated as a treatment for PIGA-CDG patients with treatment-resistant epilepsy. Pyridoxine was investigated as a treatment for GPI disorders because it is thought that there may be a reduced level of intracellular pyridoxine, specifically in the brain, due to disrupted GPI-anchored protein function. Oral pyridoxine (20–30 mg/kg/day) was administered to a cohort of 4 PIGA-CDG patients for a period of 3 months and was effective in 1 patient in reducing seizure frequency35.

Various research models are available to study PIGA-CDG, such as yeast, mice and induced pluripotent stem cells (iPSCs). A fly model and knock-in mouse model are currently being generated.

Yeast gene SPT14 is homologous to human PIGA and is a member of the glycosyltransferase gene family. Spt14 mutant cells are defective in GPI anchoring due to a defect in the synthesis of GlcNAc-PI. They also display transcriptional defects and a downregulation in inositolphosphoceramide synthesis36.

Knockout PIGA, as well as patient-specific PIGA fly models, have been generated by Dr. Clement Chow at the University of Utah School of Medicine. Phenotypic characterization is currently underway and future work will include evaluating a link between phenotypic variation and genotypic variation37.

Pigaflox (B6.129-Pigatm1) mice were obtained from RIKEN and were previously generated by Taroh Kinoshita and Junji Takeda38.

Piga-deficient chimeric mice
Mutant mice have chimeric surface expression of GPI-anchored proteins. Chimerism of hematopoietic and non-hematopoietic tissues in mutant mice was low and GPI-cells appeared in peripheral blood of some mutant mice43.

Piga knock-in mice
A knock-in mouse model is in the process of being created, beginning in 2019 by Dr. Taroh Kinoshita and Dr. Yoshiko Murakami of Osaka University37.

Clinical and Basic Investigations into Congenital Disorders of Glycosylation (NCT04199000)
The Frontiers in Congenital Disorder of Glycosylation Disorders Consortium (FCDGC) is conducting a 5-year natural history study on all CDG types, including PIGA-CDG. The purpose of this study is to define the natural history and clinical symptoms of CDG, develop new diagnostic techniques, identify clinical biomarkers that can be used in future clinical trials and evaluate whether dietary treatments improve clinical symptoms and quality of life.