MAN1B1-CDG is a rare inherited condition that affects many parts of the body. It is a relatively common congenital disorder of glycosylation (CDG) with more than 40 patients reported in the medical literature to date.  MAN1B1-CDG is classified as a disorder of N-linked protein glycosylation. MAN1B1-CDG is caused when an individual has mutations in both copies of their MAN1B1 gene, which provides instructions for making an enzyme that helps ensure that misfolded N-linked glycoproteins are broken down. Mutations in the MAN1B1 gene cause proteins to have altered patterns in the sugar chains on N-linked glycoproteins and allows some misfolded proteins to accumulate instead of being degradation. Symptoms of MAN1B1-CDG usually begin at infancy and affect multiple systems. The most common symptoms are developmental delay, low muscle tone, mild intellectual disability, obesity, mild facial abnormalities, and behavioral problems. Several screening tests are available for MAN1B1-CDG, but a definitive diagnosis is achieved through genetic testing. There are currently no approved treatments for MAN1B1-CDG, and treatment is focused on the management of specific symptoms and preventing disease complications.

Endoplasmic reticulum mannosyl-oligosaccharide alpha-1,2-mannosidase congenital disorder of glycosylation (MAN1B1-CDG) is a rare autosomal recessive genetic disorder1,2. The first cases of MAN1B1-CDG were reported in 2011, and since then approximately 40 cases have been described to-date3.

The MAN1B1 gene encodes a protein (MAN1B1) that is thought to play several roles in N-glycoprotein quality control. It is a mannosidase and can catalyze the removal of a specific mannose sugar from the glycan chain of recently synthesized N-glycoproteins (Figure 1) that are improperly folded1. Removal of this mannose residue marks them for degradation through ER-associated degradation (ERAD). As well, if misfolded N-glycoproteins escape ERAD and enter the Golgi, MAN1B1 can bind to them, preventing their secretion and helping to shuttle them back to the ER for degradation4,5. Deficiency in MAN1B1 can cause misfolded proteins to accumulate, which can cause stress and alterations to the Golgi structure1. Due to the important role the Golgi plays in N-glycan processing, this leads to altered glycosylation patterns for some N-glycoproteins and causes N-linked CDG (Type 2).

Symptoms begin in infancy and typically include developmental delay, low muscle tone, mild intellectual disability, obesity, mild facial abnormalities, and behavioral problems3,6–8. Definitive diagnosis can only be achieved through genetic testing, but transferrin analysis shows a characteristic Type 2 pattern3,8,9. Currently, there is no cure or treatment for MAN1B1-CDG, and therapy is based on management of symptoms.

MAN1B1-CDG is an autosomal recessive disorder, meaning an affected individual inherits one defective copy of the gene from each asymptomatic parent.

The MAN1B1 gene encodes the enzyme endoplasmic reticulum mannosyl-oligosaccharide alpha-1,2-mannosidase (MAN1B1), which is also called ERManI. Although the function of the protein remains incompletely understood, it is believed that MAN1B1 is involved in the quality control process for the synthesis of N-linked glycoproteins in two ways:

MAN1B1 possesses mannosidase activity and can catalyze the removal of the middle mannose mannose sugar from the glycan chain of recently synthesized but improperly folded N-glycoproteins. Removal of this mannose residue marks proteins for degradation through ERAD. There is evidence that other proteins may catalyze the same reaction as MAN1B1, but MAN1B1 is also able to bind to improperly folded N-glycoproteins and prevent their secretion from the Golgi4,5,10. 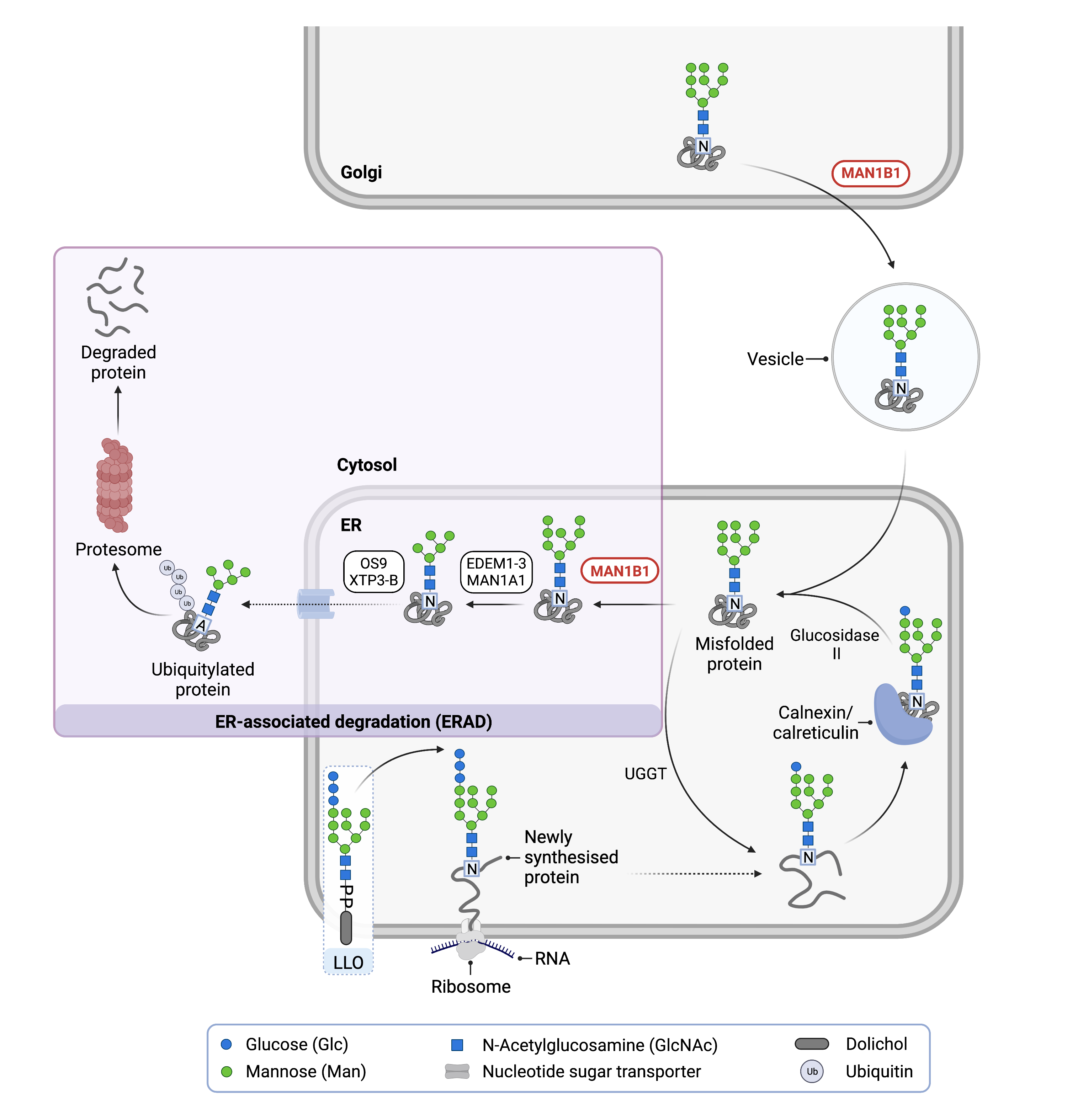 Figure 1: Role of MAN1B1 in Glycosylation.
MAN1B1 is involved in N-glycoprotein quality control. In the ER, MAN1B1 removes the middle mannose from an N-glycan of a misfolded protein, which is needed for protein degradation via the ER-associated degradation (ERAD) pathway. In the Golgi, MAN1B1 shuttles misfolded N-glycoproteins back into the ER for degradation via ERAD.

N-linked glycosylation is the process by which a glycan chain is added to the amino acid asparagine on some recently synthesized proteins. N-glycoprotein synthesis is split into three main phases:

The third step of glycosylation also incorporates a quality control process. After attachment of the glycan to the polypeptide (step 2), the three glucose residues are sequentially removed from the glycan chain by glycosidases, and the resultant N-glycoprotein undergoes additional folding with the help of chaperones. If the protein is folded correctly, removal of the terminal glucose is a signal for the N-glycoprotein to be transported to the Golgi apparatus.  However, if the protein is not folded correctly, the enzyme UDP-glucose:glycoprotein glucosyltransferase (UGGT) will re-add a glucose molecule to the glycan chain11. Next, two chaperones, calreticulin and calnexin, bind to the misfolded-protein and prevent it from leaving the ER and giving it more time to become properly folded12–14. If an N-glycoprotein is unable to fold correctly, it will eventually be marked for degradation through ERAD.

The first step of ERAD is the removal of a mannose residues from the glycan chain of a misfolded N-glycoprotein by MAN1B1. This allows other mannosidases to trim addition mannoses from the glycan. The now-truncated N-glycoprotein is then translocated into the cytosol where it has multiple ubiquitin molecules added to the protein, a process called polyubiquitination. The ubiquitination marks the misfolded glycoprotein for transport to the proteasome, where it is chemically broken apart.

Mutations in the MAN1B1 gene lead to the production of an abnormal enzyme with reduced or no activity, and results in the accumulation of some misfolded N-glycoproteins and N-glycoproteins with abnormal glycan structures3,8,14,15. Structural changes to the Golgi, possibly due to the inadequate degradation of misfolded proteins, is also noted in MAN1B1-CDG; this may impact the normal processing of N-glycan chains on otherwise normally folded proteins1. Inadequate MAN1B1 activity on misfolded N-glycoproteins may result in inappropriate trimming of mannose sugars from the N-glycan by other mannosidase enzymes present in the ER and Golgi, resulting in the formation of proteins with abnormal N-glycan chains3,8,14,15.

MAN1B1-CDG does not have many significant biochemical markers, but elevated liver enzymes (transaminases) and/or abnormal blood clotting (coagulation) tests may be found in some patients3,9.

MAN1B1-CDG should be suspected in any multisystem disorder, especially when developmental delay, hypotonia, and facial dysmorphism is present. Screening in suspected patients typically begins with a blood test to analyze serum transferrin. Profiling of total serum N-glycans by mass spectrometry can also be performed3,8,15,17. However, direct molecular genetic testing is the only way to definitively diagnose MAN1B1-CDG.

Affected individuals will display a Type 2 pattern on transferrin isoelectric focusing (TIEF), with markedly increased trisialotransferrin and decreased tetrasialotransferrin. Type 2 patterns are observed in N-linked CDG that involve processes that occur after the oligosaccharide has been attached to the protein.

There are no currently no known biomarkers specific to MAN1B1-CDG.

Information on long-term outcomes for MAN1B1-CDG patients is unavailable, but patients in their 20s have been reported. Developmental delays reported include delayed walking until 4 years old, delayed speech development and limited speech after development and assistance required for bathing and dressing2.

Management of MAN1B1-CDG requires a multidisciplinary team and may include combinations of physical therapy, occupational therapy, oral motor and speech therapy, and psychiatry. Excessive drooling due to oral-facial hypotonia may be managed with subcutaneous scopolamine injections3.

There are currently no treatment options available for MAN1B1-CDG. Disulfiram can reduce protein translation and potentially reduce the amount of misfolded glycoproteins formed; oral disulfiram was tested in one MAN1B1-CDG patients but no improvement to transferrin glycosylation was observed17. Treatment is focused on management of symptoms and prevention of complications.

Work being done at JDC Research Co is looking at developing gene-based therapies and small molecule therapies to find a treatment or cure for MAN1B1-CDG18.

Model organisms for MAN1B1 are currently in development to study MAN1B1-CDG.  Several human cell lines have been used to investigate the role MAN1B1 plays in protein quality control.

Dr. Clement Chow and JDC Research Co have generated a Man1b1 Drosophila model to study gene function through a knockdown mutation in the eye, which is not lethal and makes the model suitable for drug screen studies. In addition, JDC Research Co in partnership with Vivian Therapeutics generated temperature sensitive knockdowns of Man1b1, which have shown that flies with reduced levels of Man1B1 protein have a decreased survival rate to adulthood18.

HeLa immortal cell line
HeLa cells were used to further demonstrate the non-enzymatic role MAN1B1 can play as a gatekeeper in proteostasis4.

Clinical and Basic Investigations into Congenital Disorders of Glycosylation (NCT04199000)
The Frontiers in Congenital Disorder of Glycosylation Disorders Consortium (FCDGC) is conducting a 5-year natural history study on all CDG types, including MAN1B1-CDG. The purpose of this study is to define the natural history and clinical symptoms of CDG, develop new diagnostic techniques, identify clinical biomarkers that can be used in future clinical trials and evaluate whether dietary treatments improve clinical symptoms and quality of life.