EDEM3-CDG is a rare inherited condition that affects many parts of the body. It is a recently discovered CDG, first being reported in 2021 with 12 patients from 7 families. EDEM3-CDG is classified as a disorder of N-linked protein glycosylation. EDEM3-CDG arises from an individual having mutations in both copies of their EDEM3 gene, which provides instructions for making an enzyme that helps ensure misfolded N-linked glycoproteins are broken down. Mutations in the EDEM3 gene cause proteins to have altered patterns in the sugar chains on N-linked glycoproteins and allows misfolded proteins to accumulate instead of being degraded. Symptoms of EDEM3-CDG begin in infancy and affect multiple systems. The most common symptoms are developmental delay, feeding/growth problems, abnormal features, and behavioural problems. Screening tests that assess abnormal sugars on N-linked glycoproteins are available for EDEM3-CDG, but a definitive diagnosis is achieved through genetic testing. There are currently no approved treatments for EDEM3-CDG, and treatment is focused on the management of specific symptoms and preventing disease complications.

Endoplasmic reticulum (ER) degradation enhancing alpha-mannosidase like protein 3 congenital disorder of glycosylation (EDEM3-CDG) is a rare autosomal recessive genetic disorder. The first cases of EDEM3-CDG were reported in 2021, with 12 patients from 7 families1.

The EDEM3 gene encodes a protein (EDEM3) that is thought to play a role in N-glycoprotein quality control. EDEM3 has mannosidase activity and can catalyze the removal of specific mannose sugars from the glycan chain of N-glycoproteins that are improperly folded. Removal of mannose residues aids glycoprotein degradation through ER-associated degradation (ERAD)—a complex process that begins in the ER and monitors, identifies, and degrades proteins2. Deficiency in EDEM3 results in decreased removal of mannose residues and accumulation of misfolded proteins. Further studies are needed to understand the precise disease mechanism of EDEM3-CDG1,3.

Symptoms of EDEM3-CDG begin in infancy and typically include developmental delay, feeding/growth problems, abnormal features, and behavioural problems. Definitive diagnosis can only be achieved through genetic testing, but total N-glycan analysis may aid in diagnosis. Currently, there is no cure or treatment for EDEM3-CDG, and treatment is based on managing symptoms1,4.

EDEM3-CDG is an autosomal recessive disorder, meaning an affected individual inherits one defective copy of the gene from each asymptomatic parent.

The EDEM3 gene encodes the enzyme ER degradation enhancing alpha-mannosidase like protein 3 (EDEM3). EDEM3 is a part of a group of proteins (ER-1,2-alpha mannosidases or EDEMs) that possess mannosidase activity and can catalyze the removal of mannose sugar residues from the glycan chain of improperly folded N-glycoproteins. The removal of mannose residues by EDEM3, along with EDEM1 and EDEM2, accelerates the degradation of misfolded glycoproteins through ERAD (Figure 1)1,3.

N-linked glycosylation is the process by which a glycan chain is added to the amino acid asparagine on a recently synthesized protein. N-glycoprotein synthesis is split into three main phases:

The third step of glycosylation also incorporates a quality control process. After attachment of the glycan to the polypeptide (step 2), the three glucose residues are sequentially removed from the glycan chain by glycosidases, and the resultant N-glycoprotein undergoes additional folding with the help of chaperones5. If the protein is folded correctly, removal of the terminal glucose is a signal for the N-glycoprotein to be transported to the Golgi. However, if the protein is not folded correctly, the enzyme UDP-glucose: glycoprotein glucosyltransferase (UGGT) will re-add a glucose molecule to the glycan chain6. Next, two chaperones, calreticulin and calnexin, bind to the misfolded protein and prevent it from leaving the ER—giving the misfolded protein more time to become properly folded7–9. If an N-glycoprotein is unable to fold correctly, it will eventually be marked for degradation through ERAD. 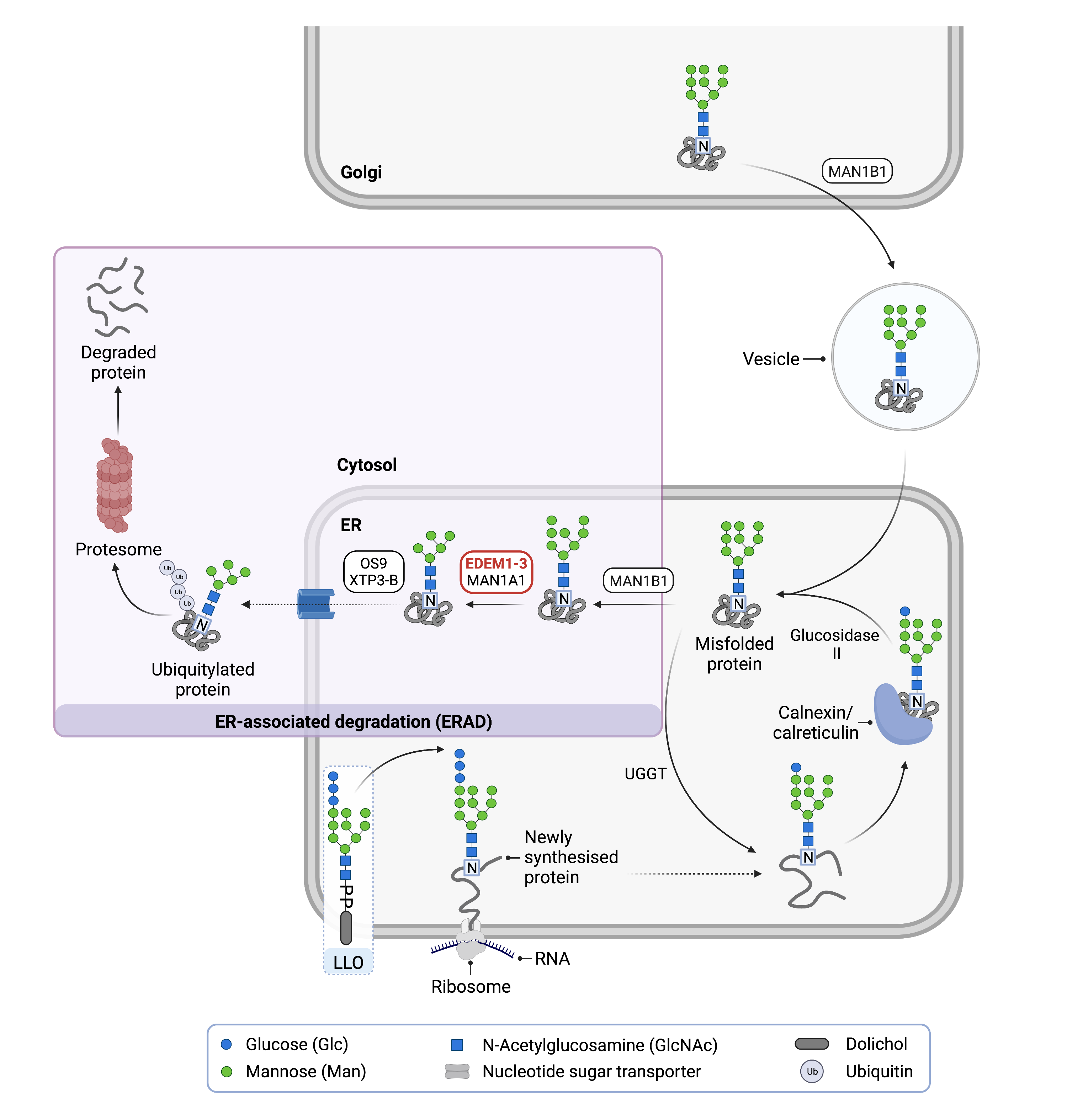 Figure 1. Role of EDEM3 in glycosylation.
EDEM3 is involved in ERAD/non-lysosomal degradation of misfolded N-glycoproteins. EDEM3 removes mannose residues from the Man8GlcNAc2 glycan, which is needed for the misfolded protein to be able to move to the cytosol for degradation.

The first step of ERAD is the removal of the middle mannose residue from the glycan chain (M9) of a misfolded N-glycoprotein by MAN1B1. This allows other mannosidases (EDEMs 1-3 and MAN1A1) to trim additional mannoses from the glycan (M8). EDEM3 removes one to three mannose residues from the Man8GlcNAc2 (M8) glycan chain, generating Man7GlcNAc2 (M7), Man6GlcNAc2 (M6), or Man5GlcNAc2 (M5) (Figure 2). EDEM3 may also play a role in generating further truncated N-glycans, such as Man4GlcNAc2 (M4) and Man3GlcNAc2 (M3)1. This now-truncated N-glycoprotein can then be recognized by lectin OS-9 and is translocated into the cytosol and has multiple ubiquitin molecules added to the protein, a process called polyubiquitination3. The ubiquitination marks the misfolded glycoprotein for transport to the proteasome, where it is chemically broken apart. 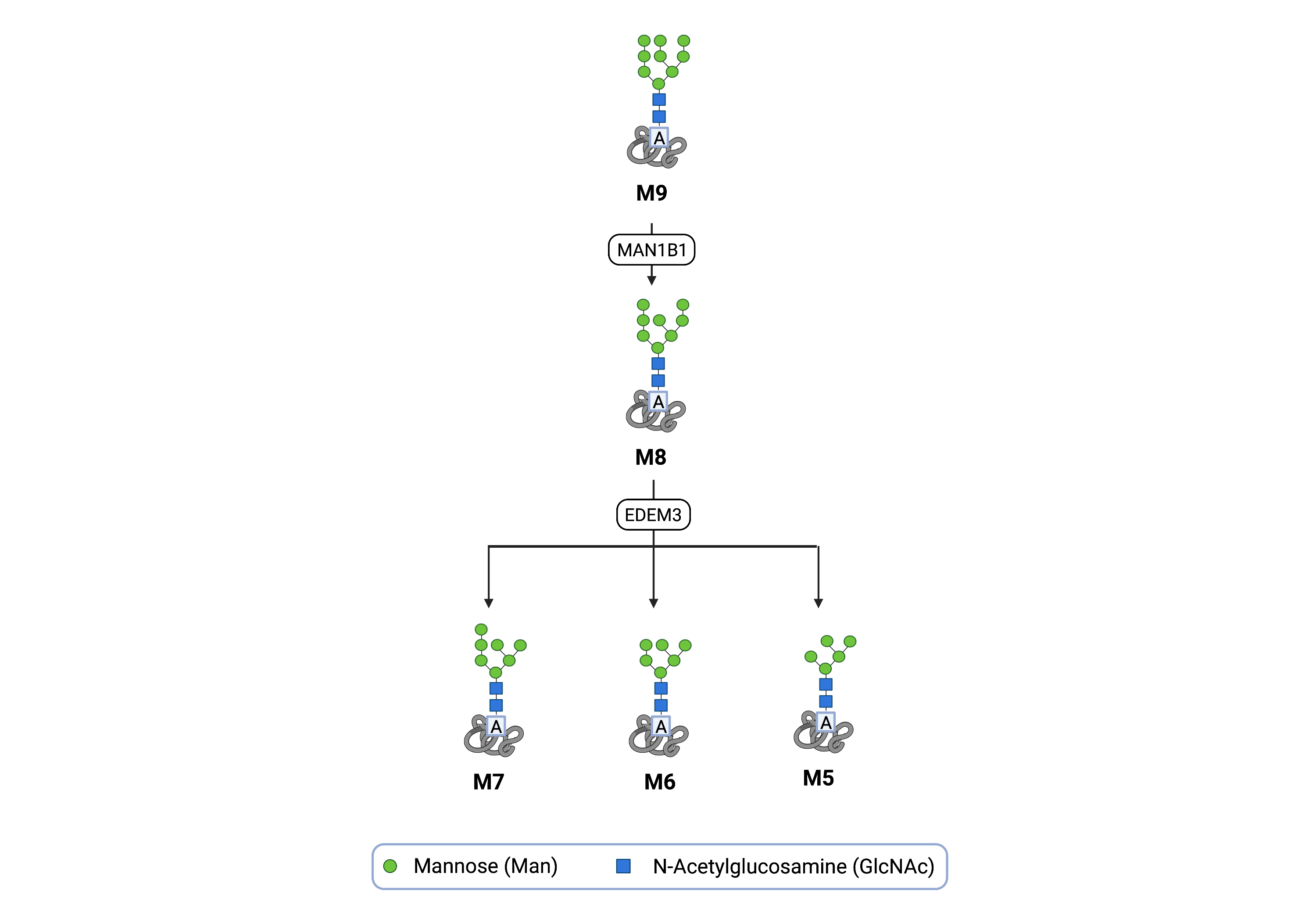 Impaired EDEM3 activity may lead to reduced trimming of Man8GlcNAc2, causing an accumulation of abnormal glycans in cells. Further studies are necessary to better understand the pathophysiological mechanism of EDEM3-CDG1.

Individuals with EDEM3-CDG typically develop signs and symptoms during infancy. EDEM3-CDG is primarily characterized by developmental delay, speech delay, and mild facial abnormalities. The characteristic clinical presentations of EDEM3-CDG include1,4:

EDEM3-CDG should be suspected in any multisystem disorder, especially when developmental delay, speech delay, and facial dysmorphism is present. Screening in suspected patients typically begins with a blood test to analyze serum transferrin, however, patients tested to date have shown normal transferrin glycosylation. Profiling of total N-glycans in the serum by mass spectrometry can also be performed and may show global glycosylation abnormalities. Direct molecular genetic testing is the only way to definitively diagnose EDEM3-CDG1,4.

Through N-glycan analysis of EDEM3-CDG patient fibroblasts, an increased M9:M3 ratio may serve as a biomarker to aid diagnosis1.

EDEM3-CDG is classified as a disorder of N-linked protein glycosylation.

Under the former CDG classification system, EDEM3-CDG is classified as a Type II CDG, which arise due to defects in the processing of N-glycans attached to proteins.

With EDEM3-CDG being a recently-discovered CDG and the few cases currently reported in the medical literature, information on long-term outcomes for EDEM3-CDG patients is unclear. As of 2021, a patient has been reported to be 33 years old4.

Management of EDEM3-CDG requires a multidisciplinary team and may include combinations of physical therapy, occupational therapy, oral motor and speech therapy, and psychiatry.

There are currently no treatment options available for EDEM3-CDG. Treatment is focused on management of symptoms and prevention of complications.

Several mouse models for EDEM3 have been generated.

Edem3 -/-  knockout mice
Edem3 knockout mice were used to analyze glycan profiles in plasma protein and brain lysate assays. Like affected humans, mice have decreased ratios of M5: M9, M6: M9, and M7: M9 glycans and increased abundance of M8 and M9 glycans in both plasma and brain profiles. It is noted that Edem3 knockout mice did not have any obvious phenotypic characteristics, but subtle changes such as reduced weight of brain and body and skewed ratios of pups were observed1.

Clinical and Basic Investigations into Congenital Disorders of Glycosylation (NCT04199000)
The Frontiers in Congenital Disorder of Glycosylation Disorders Consortium (FCDGC) is conducting a 5-year natural history study on all CDG types, including EDEM3-CDG. The purpose of this study is to define the natural history and clinical symptoms of CDG, develop new diagnostic techniques, identify clinical biomarkers that can be used in future clinical trials and evaluate whether dietary treatments improve clinical symptoms and quality of life.