DPAGT1-CDG, formerly known as CDG-Ij, is a rare inherited condition that affects many systems in the body. To date, 40 patients are reported in the medical literature. DPAGT1-CDG is classified as a disorder of N-linked protein glycosylation. DPAGT1-CDG is caused when an individual has mutations in both copies of their DPAGT1 gene, which provides instructions for making an enzyme that catalyzes the first step in the N-glycosylation pathway. Mutations in the DPAGT1 result in impaired formation of N-linked glycoproteins. DPAGT1-CDG patients may have a severe presentation, characterized by neurological abnormalities, intellectual disability, epilepsy, small head size, and low muscle tone, or a mild presentation primarily consisting of a neuromuscular transmission disorder associated with muscle weakness and fatigue; the mild presentation is also known as DPAGT1 congenital myasthenic syndrome (DPAGT1-CMS). Screening tests are available for DPAGT1-CDG, but a definitive diagnosis is achieved through genetic testing. There are currently no approved treatments for DPAGT1-CDG, but acetylcholinesterase inhibitors have been used to treat muscle-related symptoms in patients with both mild and severe disease. Other treatments are focused on the management of specific symptoms and preventing complications.

Dolichyl-phosphate N-Acetylglucosamine (GlcNAc) phosphotransferase 1 congenital disorder of glycosylation (DPAGT1-CDG) is a rare autosomal recessive genetic disorder. The DPAGT1 gene encodes an enzyme that is responsible for attaching GlcNAc-phosphate to the lipid carrier dolichol; this is the first step in the synthesis of the lipid-linked oligosaccharide (LLO) in the endoplasmic reticulum (ER) (Figure 1)1,2. LLO synthesis is a precursor step to N-glycosylation, which is the process by which sugar chains (glycans) are added to the amino acid asparagine in some proteins3. Many proteins require N-glycosylation to achieve full functionality. Mutations to DPAGT1 result in an enzyme with reduced catalytic activity, where GlcNAc transfer to dolichol is reduced or absent. Deficiency in the DPAGT1 enzyme results in the incomplete assembly of the LLO, leading to insufficient N-glycosylation of glycoproteins1.

The first reported case of DPAGT1-CDG was in 2003 and there are 40 confirmed cases to date, 18 of which are members of a large consanguineous family2,4–7. Symptoms typically begin at infancy, but some cases show symptoms during pregnancy with decreased fetal activity. Symptom onset may also be delayed into childhood. Characteristic presentations of DPAGT1-CDG with onset at infancy include severe neurological symptoms, gastrointestinal and feeding problems, and dysmorphic features2,4–7.

Several genes associated with CDG (DPAGT1, ALG2, ALG14, GFPT1) are also associated with congenital myasthenic syndrome (CMS), a group of neuromuscular transmission disorders8,9.  DPAGT1-associated congenital myasthenia syndrome (DPAGT1-CMS) is a less severe presentation of DPAGT1-CDG and is characterized by muscle weakness and fatigue beginning in childhood10. A potential diagnosis of DPAGT1-CDG can be determined through transferrin analysis, but a definitive diagnosis can only be achieved through genetic testing. There are currently no approved treatments for DPAGT1-CDG.

DPAGT1-CDG is an autosomal recessive disorder, meaning an affected individual inherits one defective copy of the gene from each asymptomatic parent.

The DPAGT1 gene encodes the enzyme UDP-GlcNAc: dolichylphosphate N-Acetylglucosaminephosphotransferase 1 (DPAGT1). The DPAGT1 enzyme is also called GlcNAc-1-P Transferase or ALG7. DPAGT1 is located in the ER membrane where it has a role in the assembly of the LLO, the oligosaccharide precursor used in protein N-glycosylation1. The DPAGT1 enzyme catalyzes the first step in LLO synthesis: the transfer of GlcNAc-phosphate from the nucleotide sugar, UDP-GlcNAc, to the lipid carrier dolichol-phosphate (Dol-P). Successful LLO synthesis is a prerequisite for N-glycosylation, wherein the glycan chain is transferred from the LLO to an asparagine residue on a protein.

LLO synthesis is carried out by a series of enzymes encoded by the DPAGT1 and ALG genes and can be divided into two phases: Phase I and Phase II (Figure 1)3. 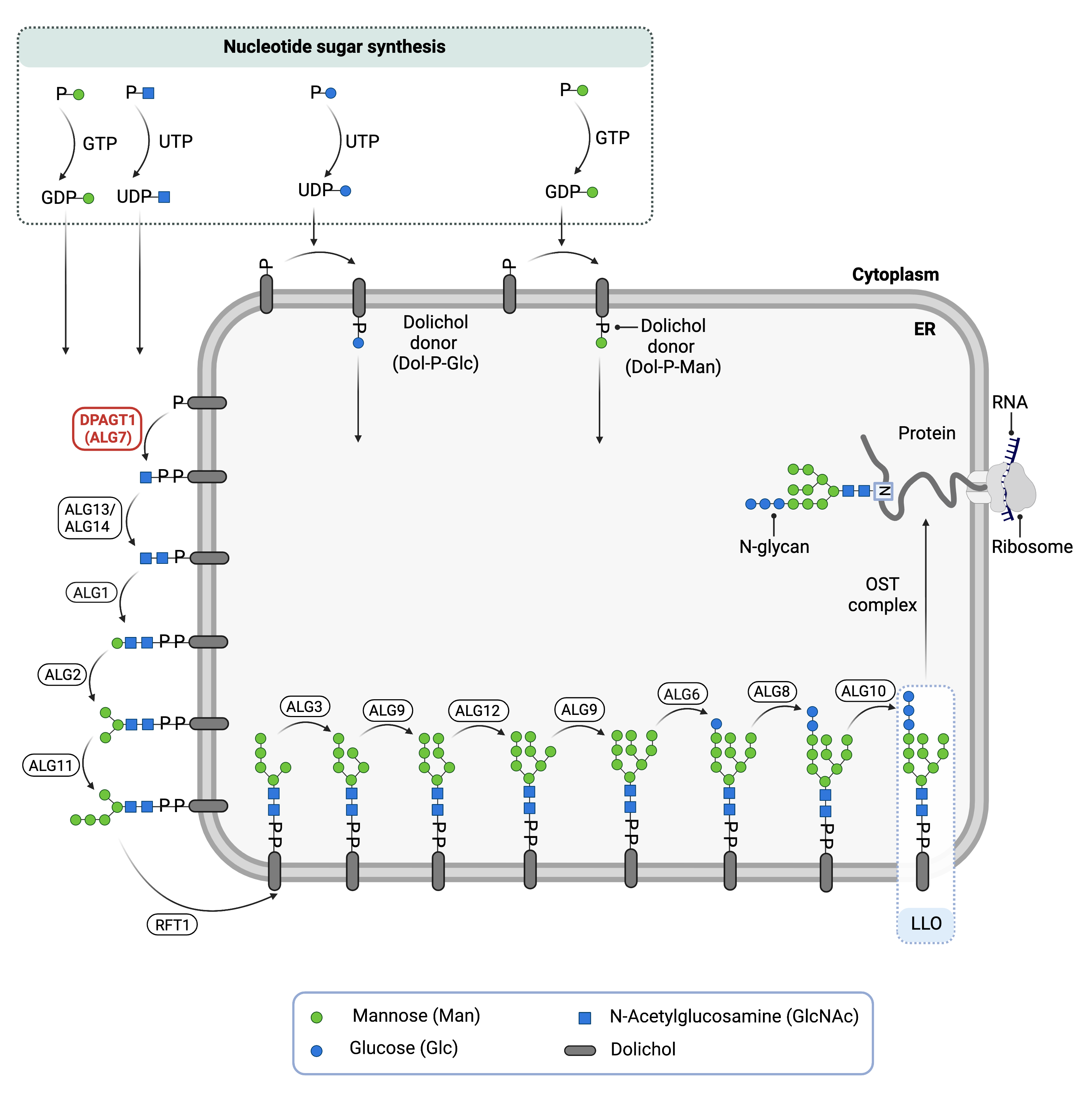 Phase I of LLO synthesis takes place on the cytoplasmic side of the ER. It begins with the sequential attachment of two N-Acetylglucosamine (GlcNAc2) and five mannose (Man5) residues to Dol-PP by several ER enzymes. The DPAGT1 enzyme catalyzes the transfer of GlcNac-phosphate from the nucleotide sugar, UDP-GlcNAc, to Dol-P, generating Dol-PP-GlcNAc. The subsequent GlcNAc and mannose sugars are transferred from UDP-GlcNAc and GDP-mannose onto the growing LLO by several enzymes. The intermediate structure, Dol-PP-GlcNAc2Man5, is translocated from the cytoplasm into the ER lumen by the RFT1 enyzme3,11 .

Phase II of LLO synthesis takes place in the ER lumen. Once in the lumen, four mannose residues followed by three glucose (Glc3) residues are added to the intermediate structure, generating the complete LLO, Dol-PP-GlcNAc2Man9Glc3. Mannose and glucose are transferred from glycosyl donors Dol-P-mannose and Dol-P-glucose, which are formed on the cytoplasmic side of the ER and must also be flipped across the ER membrane11.

Once assembled, the oligosaccharide is transferred en bloc from Dol-PP to asparagine residues of newly synthesized protein via the enzyme complex oligosaccharyltransferase (OST), resulting in N-glycosylation of the protein13. The activity of OST is highly specific for the completely assembled 14-sugar oligosaccharide, GlcNAc2Man9Glc3.

Mutations in the DPAGT1 gene lead to the production of an abnormal enzyme with reduced or no activity, thereby disrupting the transfer of the first GlcNAc residue onto Dol-P1. As a result, LLO synthesis is incomplete and the transfer of its glycan component onto proteins is impaired, resulting in N-glycoproteins that are insufficiently glycosylated (hypoglycosylation). Since N-glycans are important for the proper function of many processes in the body, DPAGT1-CDG affects multiple systems. In DPAGT1-CMS, the DPAGT1 enzyme may retain a larger percentage of normal enzymatic activity which mitigates the multisystemic phenotype1. It is proposed that the primary disease mechanism in DPAGT1-CMS is reduced levels of acetylcholine receptors at the endplate region of the neuromuscular junction as a result of hypoglycosylation10.

Mutations in DPAGT1 causing CMS have been found in the conserved region of the protein, indication a disruption to proper functioning of the protein10. Patients with DPAGT1-CMS typically have compound heterozygous mutations that results in 50% or more normal catalytic activity on one allele, while individuals with DPAGT1-CDG have significant loss of function in both alleles. In both cases, mutations may either reduce the stability of the protein or reduce enzyme activity1.

Individuals with DPAGT1-CDG typically have either a severe, multisystemic presentation or a milder presentation that primarily involves muscle weakness (DPAGT1-CMS).

Individuals with DPAGT1-CDG typically develop signs and symptoms during pregnancy (decreased fetal activity) or infancy13. DPAGT1-CDG is primarily characterized by a multi-systemic disorder with mild to severe neurological impairment. The characteristic clinical presentations of DPAGT1-CDG include2,4–7:

Individuals with DPAGT1-CMS typically present with symptoms in childhood which is primarily characterized by muscle weakness. The characteristic clinical presentations of DPAGT1-CMS include8,10:

Although diagnosis of DPAGT1-CDG may be suspected based on presentation of symptoms and a detailed patient history, direct molecular genetic testing is the only definitive diagnostic test. Preimplantation screening has also been used to identify DPAGT1 mutations in at-risk embryos15. Screening in suspected patients begins with a blood test to analyze serum transferrin.  Specialized testing on muscle and nerves is typically carried out when DPAGT1-CMS is suspected.

Individuals with DPAGT1-CDG show a type 1 pattern by transferrin isoelectric focusing (TIEF) or mass spectrometry analysis of transferrin6,7. Type 1 patterns are observed in CDG that arise due to defects in LLO assembly and are characterized by a decrease in tetrasialo-transferrin and an increase in di-sialo and a-sialo transferrin isoforms.

In patients with DPAGT1-CMS, transferrin patterns are reported as normal in approximately half of the patients tested16.

Tubular aggregates are observed in muscle biopsies of patients with DPAGT1-CMS10.

For patients with DPAGT1-CMS, single fiber EMG or nerve stimulation tests can be used to investigate the activity of individual muscle fibers and detect abnormal signalling between nerves and muscles10.

Prognosis of DPAGT1-CDG may vary depending on the severity of an individual’s symptoms. Most patients with DPAGT1-CDG have severe symptoms and 80% die in early childhood from complications of early-onset epileptic encephalopathy and severely delayed development5–7. The oldest individual with DPAGT1-CDG that has been described in the medical literature was 34 years old, as reported in 20195.

Management of DPAGT1-DG requires a multidisciplinary team and may include combinations of physical therapy, occupational therapy, speech or vision therapy and palliative measures14.

It has been reported that acetylcholinesterase inhibitors may improve muscle related symptoms for patients with CDG and CMS10,14. Treatment for other symptoms is focused on management of symptoms and prevention of complications.

Yeast ALG7 is orthologous to human DPAGT1. Null mutations to the ALG7 gene in yeast show that ALG7 is required for cell growth. Mutations that disrupt the ALG7 gene result in cell lethality17. Additionally, it was found that mutants have a difference in transcript number compared to wild-type, which may influence the synthesis of regulatory elements directly or indirectly.

Algn-7 (orthologous to DPAGT1 in humans) was mutated using RNAi and deletion mutagenesis. It was found that Algn-7 and N-glycosylation are required for oogenesis and oocyte-to-embryo transition18. Mutant phenotypes observed included larval lethality, defects in oogenesis and oocyte-to-embryo transition. Five germline-expressed genes with similar phenotypes to algn-7 were identified by examining RNAi phenotypes, suggesting a tool to detect new CDG candidate genes and associated gene networks.

Homozygous Dpagt1D166G/D166G missense mutation
A homozygous missense mutation (D166G) in Dpagt1 has been found to impede follicle development in female mice, resulting in less eggs at ovulation, as well as underdeveloped oocytes after in vitro fertilization20. Conditional knockouts of Dpagt1 in oocytes specifically have been shown to cause infertility.

Dpagt1 knockout ES cell line
Embryonic Stem (ES) cell line Dpagt1tm1a(EUCOMM)Hmgu is a targeted knockout/null mutation of Alg6. A “conditional-ready” allele can be created by flp recombinase expression in mice carrying this allele, and cre expression results in a knockout mouse. If cre is expressed without flp expression, a reporter knockout mouse can be generated (MGI).

Patient-derived fibroblasts
Patient-derived fibroblasts have been used to examine DPAGT1 transcriptional profiles and nucleotide GTP levels2. A study showed that the six mutations analyzed (p.Leu120Met, p.Val264Gly, p.Arg301Cys, p.Arg301His, p.Leu385Arg, and p.Phe110Ser) affect either splicing activity, GTP stability, or the ability of the protein to localize to the ER membrane, as well as a reduced response to ER stress.

The Frontiers in Congenital Disorder of Glycosylation Disorders Consortium (FCDGC) is conducting a 5-year natural history study on all CDG types, including DPAGT1-CDG. The purpose of this study is to define the natural history and clinical symptoms of CDG, develop new diagnostic techniques, identify clinical biomarkers that can be used in future clinical trials and evaluate whether dietary treatments improve clinical symptoms and quality of life.