ALG13-CDG, formerly known as CDG-Is, is a rare genetic condition that affects many systems in the body. To date, there are 60 patients with ALG13-CDG reported in the literature. ALG13-CDG is classified as a disorder of N-linked protein glycosylation. ALG13-CDG is caused when a mutation arises spontaneously in an individual's ALG13 gene (located on the X chromosome), which provides instructions for making an enzyme that attaches the simple sugar N-acetylglucosamine to growing sugar chains during N-glycosylation. Mutations in the ALG13 gene cause proteins to have incomplete or absent sugar chains. The majority of patients with ALG13-CDG are female, although a few cases in males have been reported. Symptoms of ALG13-CDG begin at infancy and are primarily characterized by early onset epilepsy and global developmental delay in females and epilepsy, isolated developmental delay and liver abnormalities in males. Screening tests typically used for CDG-I type are not reliable in ALG13-CDG patients and diagnosis is achieved through genetic testing. There are currently no approved treatments for ALG13-CDG. Treatment is focused on management of specific symptoms and preventing complications.

UDP-N-acetylglucosamine (UDP-GlcNAc) transferase subunit congenital disorders of glycosylation (ALG13-CDG) is a rare X-linked genetic disorder. The first reported case of ALG13-CDG was in 20121 and to date, 60 cases have been reported1–15. The ALG13 (asparagine-linked glycosylation 13) gene encodes a UDP-N-acetylglucosamine transferase enzyme responsible for adding the second N-Acetylglucosamine (GlcNAc) residue during synthesis of the lipid-linked oligosaccharide (LLO) in the endoplasmic reticulum (ER). LLO is a precursor step to N-glycosylation, which is the process by which sugar chains (glycans) are added to the amino acid asparagine in some proteins. Deficiency in the ALG13 enzyme results in the incomplete assembly of the LLO, leading to insufficient N-glycosylation of proteins.

Symptoms begin at infancy and can differ between males and females. The characteristic presentation of ALG13-CDG in females include early onset epileptic encephalopathy (within the first 6 months), and mild to severe global developmental delay14,16. In males the characteristic presentation include mild seizures and isolated developmental delay, liver abnormalities, recurrent infections, and ophthalmological problems17. Males’ biochemical analyses show abnormal coagulation factors and transferrin glycosylation, while females’ biochemical analyses show no abnormalities17. A diagnosis can only be determined through molecular genetic testing, as screening tests typically used for CDG-I patients are normal for most ALG13-CDG patients14,15,18. There are currently no approved treatments for ALG13-CDG.

ALG13-CDG is an X-linked dominant disorder, meaning females can inherit one defective copy of the gene from one symptomatic parent (mother or father) and males can inherit one defective copy from their symptomatic mother. However, ALG13-CDG is usually caused by a new genetic mutation that arises in the affected individual  (de novo) and is not inherited from a parent17.

The ALG13 gene encodes a subunit of a bipartite UDP-N-acetylglucosamine (GlcNAc) transferase. The ALG13 protein heterodimerizes with the protein encoded by ALG14 to form a functional UDP-GlcNAc glycosyltransferase. Glycosyltransferases are enzymes that transfer glycosyl molecules during glycosylation. ALG13 is in the ER membrane where it has a role in the assembly of the LLO, a precursor for protein N-glycosylation19.

The complete UDP-GlcNAc glycosyltransferase enzyme, containing the ALG13 and ALG14 protein subunits, transfers the second GlcNAc residue to the growing oligosaccharide prior to its attachment to a protein19.

LLO synthesis is carried out by a series of enzymes encoded mostly by the ALG genes and can be divided into two phases: Phase I and Phase II (Figure 1)20. 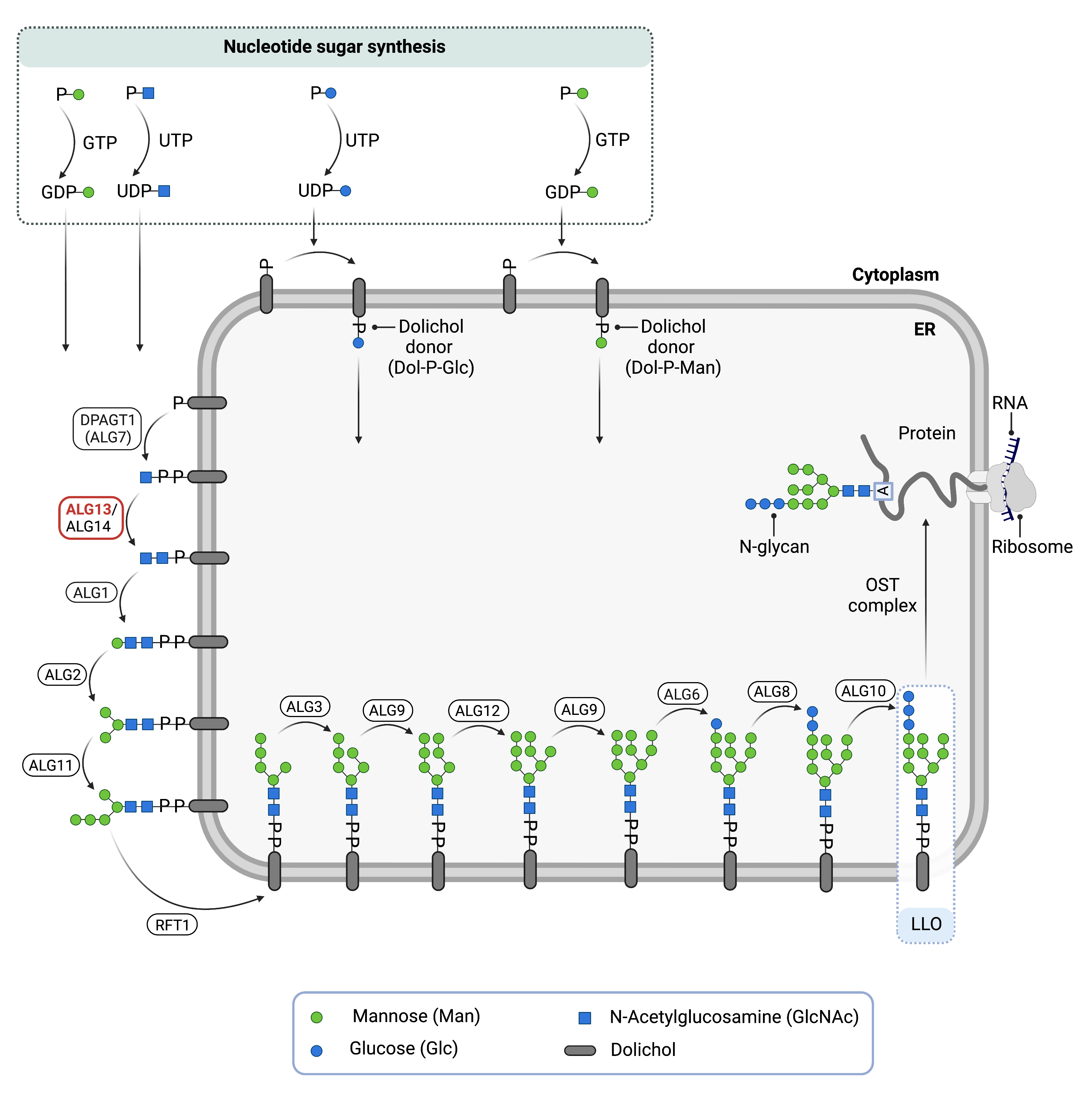 Figure 1. Role of ALG13 in glycosylation.
ALG13 is a subunit of an enzyme (UDP-N-acetylglucosamine (UDP-GlcNAc) transferase) involved in synthesising the lipid-linked oligosaccharide (LLO), which is needed for N-glycosylation. UDP-GlcNAc transferase adds a GlcNAc residue to the LLO at the endoplasmic reticulum surface.

Phase I of LLO synthesis takes place on the cytoplasmic side of the ER. It begins with the sequential attachment of two N-Acetylglucosamine (GlcNAc2) and five mannose (Man5) residues to Dol-PP by several ER enzymes. GlcNAc and mannose are transferred from nucleotide sugars UDP-GlcNAc and GDP-Man, respectively. The intermediate structure, Dol-PP-GlcNAc2Man5, is translocated across the ER membrane into the lumen via the RFT1 enzyme20,21. ALG13 functions in this phase, adding the second GlcNAc residue to the growing LLO.

Phase II of LLO synthesis takes place in the ER lumen. Once in the lumen, four Man residues followed by three glucose (Glc) residues are added to the intermediate structure, generating the complete the N-glycan, Dol-PP-Glc3Man9GlcNAc2. Man and Glc are transferred from glycosyl donors, Dol-P-Man and Dol-P-Glc, which are formed on the cytoplasmic side of the ER and must also be flipped across the ER membrane20.

Once assembled, the oligosaccharide is transferred “en bloc” from Dol-PP to asparagine residues of newly synthesized protein via the enzyme oligosaccharyltransferase (OST), resulting in N-glycosylation of the protein20. The asparagine residue must be located in regions of the protein where the sequence of amino acids is asparagine-X-serine/threonine, also called Asn-X-Ser/Thr consensus sequence, where “X” can be any amino acid except proline. The activity of OST is highly specific for the completely assembled 14-sugar N-glycan, Glc3Man9GlcNAc2.

Mutations in the ALG13 gene lead to the production of an abnormal enzyme with reduced or no activity. In the absence of ALG13, it cannot form a functional UDP-GlcNAc glycosyltransferase enzyme with ALG14. This leads to the second GlcNAc not being added to the LLO, meaning the LLO assembly is incomplete. This results in reduced transfer efficiency of the oligosaccharide by OST, resulting in N-glycoproteins that are insufficiently glycosylated (hypoglycosylation).

Mutations in ALG13 may also contribute to the epileptic phenotype through interactions with GABAARa2 subunit of GABAA membrane receptors. GABA is a neurotransmitter in the central nervous system and studies in mice show that a deficiency in ALG13 affects transcription levels of GABAARa2, which may contribute to the epileptic phenotype observed in ALG13-CDG patients22.

The ALG13 gene is found on the X chromosome (Xq23). The majority of individuals affected by ALG13-CDG have the mutation variant p.(Asn107Ser), with few other de novo mutations being reported14. The most common heterozygote mutation in females is the c.320A>G (p.Asn107Ser) variant23.

Individuals with ALG13-CDG typically develop signs and symptoms during infancy. ALG13-CDG is primarily characterized by developmental and epileptic encephalopathy. ALG13-CDG is an X-linked condition and can affect males and females differently.

The characteristic clinical presentations of ALG13-CDG in females include2,14,16,17:

90% of patients also have West syndrome. Dysmorphic features are a less common clinical presentation of ALG13-CDG, including micrognathia and hypertelorism14.

The characteristic clinical presentations of ALG13-CDG in males include15,17,24:

Males have also been reported with normal cognitive development24.

ALG13-CDG is classified as a disorder of N-linked protein glycosylation.

Under the former CDG classification system, ALG13-CDG is classified as a Type I CDG, which arise due to defects in the synthesis of oligosaccharides or their transfer to proteins.

Although diagnosis of ALG13-CDG may be suspected based on presentation of symptoms and a detailed patient history, direct molecular genetic testing is the only definitive diagnostic test. Screening in suspected patients begins with a blood test to analyze serum transferrin. However, some ALG13-CDG patients can have normal results following transferrin isoelectric focusing (TIEF), and so transferrin analysis it is not a reliable diagnostic technique for ALG13-CDG. Direct molecular genetic testing is required for diagnosis. Potential biomarkers have been identified but require further investigation.

Individuals with ALG13-CDG show normal or mildly abnormal patterns by TIEF and thus TIEF is not reliable for diagnosis and other biomarkers are needed14,15,18.

Three metabolites have been identified as potential biomarkers to aid in diagnosis of ALG13-CDG: betaine, N-acetyl-glycoprotein, and carnitine18.

Prognosis of ALG13-CDG patients is not well understood and may vary depending on the severity of an individual’s symptoms. Severely affected patients may have drug-resistant seizures17.

Management of symptoms may include combinations of physical therapy, occupational therapy, speech or vision therapy and palliative measures. Epilepsy has been reported to be drug resistant but has been managed through ketogenic diet, oral steroids, vigabatrin, or adrenocorticotropic hormone14,16,17.

There are currently no treatment options available for ALG13-CDG. Treatment is focused on management of symptoms and prevention of complications.

Several ALG13 research models have been generated including yeast and mouse model organisms.

ALG13 knockout mice have been used to characterize the epileptic phenotype of ALG13-CDG patients. ALG13KO mice display spontaneous seizures and epileptic activity, and a decrease in cortical inhibitory synaptic transmission. It was found that ALG13 influences epileptic activity through interactions with GABA receptor subunits22.

Clinical and Basic Investigations into Congenital Disorders of Glycosylation (NCT04199000)
The Frontiers in Congenital Disorder of Glycosylation Disorders Consortium (FCDGC) is conducting a 5-year natural history study on all CDG types, including ALG13-CDG. The purpose of this study is to define the natural history and clinical symptoms of CDG, develop new diagnostic techniques, identify clinical biomarkers that can be used in future clinical trials and evaluate whether dietary treatments improve clinical symptoms and quality of life.