MPI-CDG, formerly known as CDG-Ib, is a rare but treatable inherited condition that mainly affects the liver and gastrointestinal system. To date, 35 cases of MPI-CDG have been reported in the literature. MPI-CDG is classified as a disorder of N-linked protein glycosylation. MPI-CDG is caused when an individual has mutations in both copies of the MPI gene which provides instructions for making an enzyme that generates the sugar mannose-6-phosphate. Mannose-6 phosphate is required for generating molecules that donate mannose sugars onto growing sugar chains during N-glycosylation. Mutations in the MPI gene cause some proteins to have incomplete or absent sugar chains. Individuals affected by MPI-CDG can present a range of symptoms, but common clinical features include liver and gastrointestinal abnormalities, blood clotting defects, and low blood glucose levels; these symptoms typically present in infancy. Several screening tests are available for MPI-CDG, but a definitive diagnosis is achieved through genetic testing.  Early diagnosis is crucial for MPI-CDG, as it is a potentially life-threatening disease, but is treatable through dietary supplements of mannose.

MPI-CDG was first clinically reported in 19803, but it was not until 1998 that genetic mutations in MPI were first described4,5,6. Collectively, 40 MPI-CDG cases have been reported in the literature, with 28 cases that have been confirmed by genetic testing1–30. Onset of symptoms can present from infancy, where common clinical features include liver, gastrointestinal and blood clotting abnormalities—although symptoms and severity vary between affected individuals1. MPI-CDG are typically diagnosed through a combination of biochemical (transferrin analysis), enzymatic (assessment of MPI), and genetic testing. As MPI affects N-glycosylation, transferrin isoform analysis is usually performed during diagnosis, with cases presenting abnormal transferrin isoform patterns (typically type I)30. However, genetic testing typically provides a definitive diagnosis. MPI-CDG can be treated with mannose therapy, which involves dietary supplements of the monosaccharide: mannose.

MPI-CDG is an autosomal recessive disorder, meaning an affected individual inherits one defective copy of the gene from each asymptomatic parent.

The MPI gene encodes mannose phosphate isomerase (MPI), also known as phosphomannose isomerase. Isomerase enzymes alter the structure of molecules by rearranging their atoms, generating a different molecule (or isomer)31. MPI is typically found in the cytosol, where it catalyzes the conversion of fructose-6-phsophate to mannose-6-phosphate30.

Mannose-6-phosphate is needed to generate mannose-1-phosphate, which a precursor of the nucleotide sugar GDP-mannose32. Nucleotide sugars are also called glycosyl donors or sugar donors because they enable sugars to be added onto other molecules. The generation of mannose containing glycosyl donors is particularly important for N-glycosylation of proteins, which involves the attachment of a mannose-rich glycan to the amino acid asparagine on a protein33.

The first step of N-glycosylation is the building of a mannose-rich lipid-linked oligosaccharide (LLO) comprised of a 14-sugar oligosaccharide and dolichol pyrophosphate (Dol-PP). The oligosaccharide component, also referred to as the oligosaccharide precursor, is subsequently transferred en bloc to an asparagine (Asn; N) residue of a protein inside the ER. The synthesis of the LLO occurs through a stepwise process that occurs both in the cytoplasm and inside the ER, and thus requires both GDP-mannose and Dol-P-mannose as glycosyl donors33. 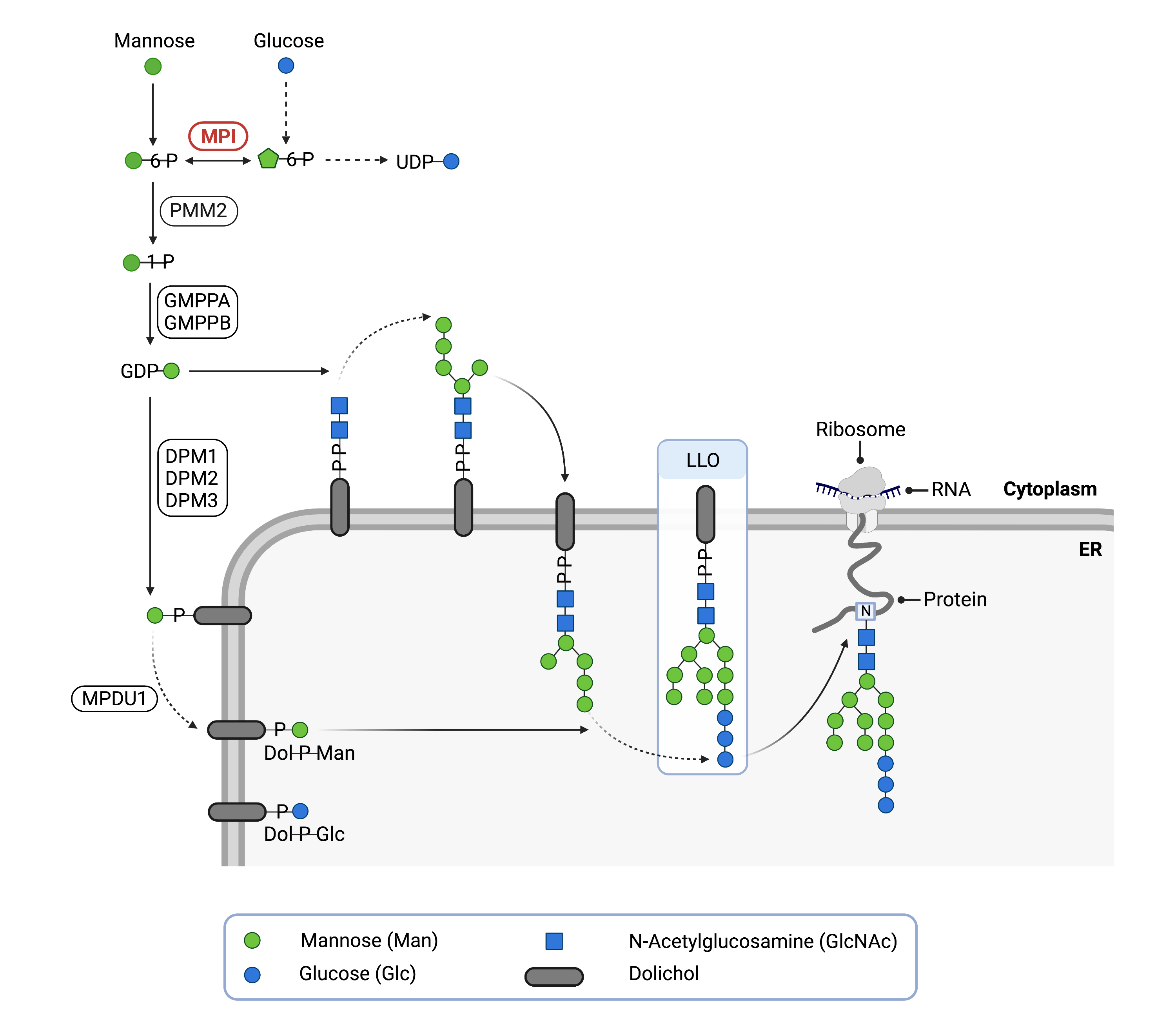 Defects in MPI reduce the ability of MPI to generate mannose-6-phsophate, which leads to abnormal N-glycans2. Deficient MPI are unable or at a reduced capacity of converting fructose-6-phohsphate to mannose-6-phosphate. Fructose-6-phosphate can be used in a different pathway (glycolytic pathway), reducing accumulation in cells, which may limit neurological effects in individuals with MPI-CDG36. However, reduced activity of MPI by gene mutations can lead to abnormal N-glycans structures and levels on proteins30. As mannose-6-phosphate can also be generated through a separate enzymatic pathway, providing cells with more mannose (such as by mannose dietary supplements) can increase levels of GDP-mannose, generating normal N-glycans and alleviating symptoms37.

To date, 21 pathogenic variants have been identified in the MPI gene, with the most common variant detected being p.Arg219Gln (c.656G > A). Of these pathogen variants, 17 are missense variants, 2 are frameshift variants, 1 is a nonsense variant, and 1 is a splice variant2,30. Individuals with MPI-CDG can also be found to have different mutations in each copy of the MPI gene (known as compound heterozygosity)5,9.

Some variants can also yield clinically asymptomatic MPI-CDG10. However, the extent of enzymatic activity does not appear to predict disease severity30.

Affected individuals typically present clinical features from infancy, with disease characterised by liver and gastrointestinal abnormalities. MPI-CDG symptoms can include:

In addition, while affected individuals are not typically associated with neurological symptoms, some individuals can have seizures30.

Under the former CDG classification system, MPI-CDG is classified as a Type I CDG, which arise due to defects in the synthesis of N-glycoproteins that occur before the glycan is transferred from the LLO onto the protein.

Screening in suspected patients typically begins with a blood test to analyze serum transferrin isoforms. Direct assessment of MPI enzymatic activity may also be used and is often performed after a transferrin analysis displays a type I pattern. Genetic testing is used to definitively diagnose MPI-CDG30.

Individuals with MPI-CDG show a characteristic type I pattern by transferrin isoelectric focusing (TIEF) or mass spectrometry analysis of transferrin30. Type I patterns are observed in CDG that arise due to defects in LLO assembly and are characterized by a decrease in tetrasialo-transferrin and an increase in di-sialo and a-sialo transferrin isoforms30.

Several biomarkers have been identified for MPI-CDG which may aid in diagnosis.

In addition to managing symptoms, mannose therapy (mannose supplements) can be used to treat MPI-CDG. Mannose supplements can alleviate symptoms, improving N-glycosylation of proteins. This is achieved by providing more mannose for hexokinase to generate mannose-6-phosphate for GDP-mannose synthesis. As mannose therapy can have limited results on liver disease, liver transplants are another therapeutic option21,24.

Several research models have been developed for studying MPI, including zebrafish, mice, and human cell lines43.

Zebrafish models with reduced levels of MPI displayed decreased LLO and N-glycan levels, 50% embryonic lethality levels (by four days after fertilization), and abnormal features in the majority of the larvae that survived. However, normal phenotypes were obtained if mannose was added to the water within 24 hours after fertilization44.

Clinical and Basic Investigations into Congenital Disorders of Glycosylation (NCT04199000)
The Frontiers in Congenital Disorder of Glycosylation Disorders Consortium (FCDGC) is conducting a 5-year natural history study on all CDG types, including MPI-CDG. The purpose of this study is to define the natural history and clinical symptoms of CDG, develop new diagnostic techniques, identify clinical biomarkers that can be used in future clinical trials and evaluate whether dietary treatments improve clinical symptoms and quality of life.

Study of ORL-1M (D-mannose) in Patients With CDG-Ib (NCT03404869)
Orpha Labs is conducting an interventional study (clinical trial) on MPI-CDG. The purpose of this study is to assess ability of mannose to treat hypoglycemia, diarrhea and vomiting and improve serum transferrin glycosylation patterns in MPI-CDG patients.